An Account of the Battle of Chateauguay Being a Lecture Delivered at Ormstown, March 8th, 1889 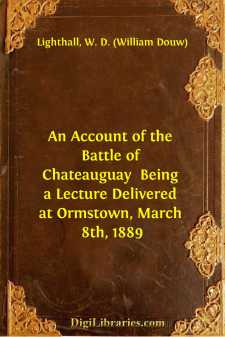 THE BATTLE OF CHATEAUGUAY.

The War of 1812 has been called by an able historian "the afterclap of the Revolution." The Revolution was, indeed, true thunder—a courageous and, in the main, high-principled struggle. Its afterclap of 1812 displayed little but empty bombast and greed. In the one, brave leaders risked their lives in that defence of rights which has made their enterprise an epoch in man's history; in the other, a mean and braggart spirit actuated its promoters to strike in the back that nation which almost alone was carrying on, in the best spirit of the Revolution, the struggle for the liberties of Europe against the designs of Napoleon. The brave spirits of the War of Freedom led the affairs of the United States no longer. All the contemptible elements, all the boasters, all those who had done least in the real fighting, had long come out of their shells and united to establish the mighty rhetorical school of the Spread Eagle! It was the legions of Spread Eagleism who wore to have the glory to be got in taking advantage of harassed England. The Battle of Châteauguay was one of the answers to that illusion.

The War was introduced by a Declaration, in which President Madison, in smooth and elaborate terms, pretended that his nation found cause for it in the tyrannical exercise by British warships of what was called The Right of Search—that is to say, a claim of ships of war to stop the ships of other nations and search them for deserters and contraband goods. That this was not, however, the true cause, was shown by the facts and cries of the war.

Firstly, the right was one belonging to all nations by international law; secondly, though it was at once relinquished by Britain in a conciliatory spirit, the Americans persisted in their campaign; thirdly, at the close of the war they did not insist at all on the abrogation of the Right of Search, in the treaty of peace.

It would be much easier to show what the real causes were:-(1), hatred of England, lasting over from the Revolution; (2), envy of her commerce and prestige; and especially (3) the scheme for the conquest of Canada.

The course of the negotiations exhibit a thoroughly ungenerous course on the part of the American authorities, contrasted with a desire not to offend on the part of Britain. President Madison's Declaration of War was made on the 18th of June, 1812, and the British Government, after using every honorable overture for friendship, only issued theirs in October, couching it, besides, in terms of regret and reproach at the unfairness in which Madison's party persisted. Owing to that unfairness and other causes the enterprise also was by no means unanimously popular in the States. A convention of delegates from the counties of New York, held in the capitol at Albany, on the 17th and 18th of September, and called the New York Convention, condemned Madison's party for declaring the war, on account of its injustice, and "as having been undertaken," they said, "from motives entirely distinct from those which have been hitherto avowed." The New England States treated it coldly....