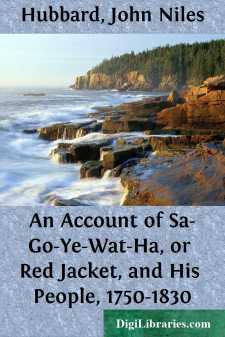 Name widely known—Interest naturally awakened in his history—His origin —Development of his genius—Opinion of Capt. Horatio Jones—Customs of his people—Their love of eloquence—Distinguished orators among them—The inviting field opened.

Among the aborigines of this country, few names have excited a deeper interest, or have been more widely and familiarly known than that of RED JACKET. The occasion of this notoriety was the rare fact that, though a rude and unlettered son of the forest, he was distinguished for the arts and accomplishments of the orator. His life marks an era in the history of his nation and his name like that of Demosthenes, is forever associated with eloquence.

Other circumstances however, impart interest to his history. His was the last great name of a nation, and he is entitled to remembrance, on the soil which was once the home of his fathers. And though linked with a melancholy association, as connected with the waning history of a people that once laid a claim to greatness, but are now fast passing into obscurity, it is not on this account the less attractive, but presents another reason for our regard.

Such was the name of SA-GO-YE-WAT-HA, or, as he has more commonly been called, Red Jacket. Having risen, by the force of his eloquence, from an obscure station to the highest rank among his people, he became conspicuous in all of those great transactions, in which they gradually relinquished a title to their old hunting grounds, and gave place to the intrusive white man. And he lived to see his nation pass from the pride of their ancient dominion, to so humble an inheritance, that his last days were embittered with the thought, that the red men were destined to become extinct. With him has ceased the glory of their council fire, and of their name.

His origin, as we have intimated, was obscure. He must be introduced, as he has come down to us, without rank or pedigree. His pedigree nature acknowledged, and gave him a right to become great among her sons. His birth is a matter of fact, its time and place, circumstances of conjecture. Some affirm that he was born at the Old Seneca Castle, near the foot of Seneca lake, not far from 1750. [Footnote: Hist. of North American tribes by Thos. L. McKenney.]

Another tradition awards the honor of his birth to a place at, or nearCanoga, on the banks of the Cayuga lake. [Footnote: Schoolcraft's Report.]

Who were his parents? and what, his early history? As the wave casts upon the shore some treasured fragment, and then recedes to mingle with its parent waters, so their names, and much of his early history have been lost in the oblivion of the past.

So likewise it is uncertain, as to the time when the wonderful powers of his genius began to be developed, or as to the steps by which he arrived at the high distinction of orator among his people.

Whether by dint of study he gained the requisite discipline of mind, and acquired that elegance of diction for which he was distinguished; whether by repeated trial and failure, accompanied by a proud ambition, and an unyielding purpose, he reached, like Demosthenes, the summit of his aspirations; or, assisted more by nature than by art, emerged, like Patrick Henry at once, into the grand arena of mind, and by a single effort attained distinction and fame, is to be gathered more from circumstances than from facts....