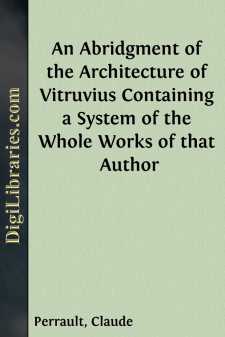 Of the great Merits of Vitruvius, and the Excellencies of his Works.

here are so many things in the Works of Vitruvius that do not directly appertain to Architecture, that one would think they were less fitted to Instruct those that have a design to learn the Precepts of this Art, than to perswade the World that the Author was the most knowing Architect that ever was, and a Person of the greatest Merit: He had the Honour to serve Julius Cæsar and Augustus, the two Greatest and most Magnificent Princes of the World, in an Age when all things were come to the highest degree of Perfection.

For one may see in reading his Works, which are full of a wonderful variety of Matters, which he treats of with a singular Erudition, that this great Man had acquired that Profound Knowledge which is necessary for his Profession by more excellent Methods, and more capable of producing something excellent, than the bare exercise and ordinary practice Lib. 6.Preface. of a Mechanical Art could possibly do; being compleat in all the Liberal Arts and Sciences, and his great Wit being accustomed, even from his Cradle, to understand the most difficult Matters: He had acquired a certain Facility which meer Artizans have not, of penetrating the deepest Secrets, and all the difficulties of so vast an Art, as that of Architecture.

Now as it’s true that in the Practice and Exercise of Arts, one does not Lib. 2.Pref. always easily distinguish the Abilities of those that work in them. The great Capacity of Vitruvius before the publishing of his Book, which he Composed when he was in Years, had not all the Esteem it deserved; which Lib. 6.Preface. he complains of in his Preface, and in the Age he lived; though it was full of the most refined Wits, yet he had the fortune of others, to find few to defend him from the Surprizes and Attacks of false Reasoning, and from the injustice that prejudice creates, to those who apply themselves more to cultivate the Talents they possess, than to make parade of them.

Lib. 2.Pref.Lib. 6.Pref.Lib. 3.Pref.Lib. 3.Pref.Lib. 6.Pref. Vitruvius was a Man, who, as to the exteriour, made a small Figure, and who had not heaped up great Riches by the practice of his Profession; and having, as it were, buried himself in study, and wholly given himself over to the Contemplation of Sciences, understood little of the Arts of the Court, or the Crafty Slights of pushing on his Fortune and making himself considerable; for though he was bestowed upon, and recommended to Augustus, by the Princess Octavia his Sister, we cannot find that he was employed in any Works of great Importance. The Noblest Edifice that we can learn that Augustus caused to be built, was, the Theatre of Marcellus; and this was done by another Architect: And the only Fabrick we can find he was employed in was not at Rome, but at Fano, a very little City; insomuch, that the greatest part of the Architects of that Age, who had gained the general Vogue, being so ignorant, that they did not know even (as himself is forced to declare) the first Principles of their Art: The Quality of a mere Architect was become so Contemptible, that if his Books had not carried all the Marks of an extraordinary Knowledge, and rare abilities, and undeceived the World by taking away the prejudice that his small employ created him, the Precepts he has left us would have wanted that Authority that was necessary to support them....