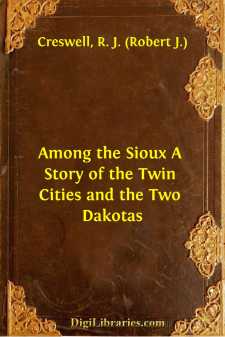 This volume is not sent forth as a full history of the Sioux Missions. That volume has not yet been written, and probably never will be.

The pioneer missionaries were too busily engaged in the formation of the Dakota Dictionary and Grammar, in the translation of the Bible into that wild, barbaric tongue; in the preparation of hymn books and text books:—in the creation of a literature for the Sioux Nation, to spend time in ordinary literary work. The present missionaries are overwhelmed with the great work of ingathering and upbuilding that has come to them so rapidly all over the widely extended Dakota plains. These Sioux missionaries were and are men of deeds rather than of words,—more intent on the making of history than the recording of it. They are the noblest body of men and women that ever yet went forth to do service, for our Great King, on American soil.

He was so filled and impressed by what he there saw and heard, that he felt impelled to impart to others somewhat of the knowledge thus gained; in order that they may be stimulated to a deeper interest in, and devotion to the cause of missions on American soil.

In the compilation of this work the author has drawn freely from these publications, viz.:

The Gospel of the Dakotas, Mary and I, By Stephen R. Riggs, D.D., LL.D. Two Volunteer Missionaries, By S. W. Pond, Jr. Indian Boyhood, By Charles Eastman The Past Made Present, By Rev. William Fiske Brown The Word Carrier, By Editor A. L. Riggs, D.D. The Martyrs of Walhalla, By Charlotte O. Van Cleve The Long Ago, By Charles H. Lee The Dakota Mission, By Dr. L. P. Williamson and others Dr. T. S. Williamson, By Rev. R. McQuesten

He makes this general acknowledgment, in lieu of repeated references, which would otherwise be necessary throughout the book. For valuable assistance in its preparation he is very grateful to many missionaries, especially to John P. Williamson, D.D., of Grenwood, South Dakota; A. L. Riggs, D.D. of Santee, Nebraska; Samuel W. Pond, Jr., of Minneapolis, and Mrs. Gideon H. Pond, of Oak Grove, Minnesota. All these were sharers in the stirring scenes recorded in these pages. The names Dakota and Sioux are used as synonyms and the English significance instead of the Indian cognomens.

May the blessing of Him who dwelt in the Burning Bush, rest upon all these toilers on the prairies of the new Northwest.