Among the Mushrooms A Guide For Beginners

by Caroline A. Burgin 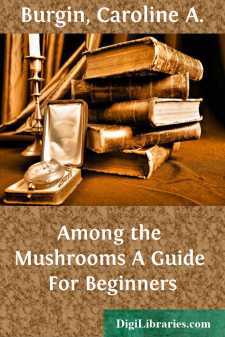 This book is intended for those who, though ignorant on the subject, desire to know something about mushrooms. The first question which such an one asks upon finding a mushroom is, “What is its name?” If there is no one near to tell him, then follows the second inquiry, “How can I find it out for myself?” If wild flowers were concerned, Gray’s little book, “How the Plants Grow,” could be used; and there is also Mrs. Dana’s book on “The Wild Flowers,” that has given so much pleasure. In the case of mushrooms, however, but one answer can be returned to all questions: “There is no American text-book on mushrooms, there is no manual for beginners.”

There are many books on British fungi for students, but we want some popular work easy to understand, with no technical expressions.

This necessity for a simple guide-book has been felt by many. Let us give our own experience. We procured a list of works on fungi, and looked for some volume not too deep for our comprehension nor too costly for our purse. Among those we found were “Handbook for Students” (Taylor); “Edible and Poisonous Fungi” (Cooke), and a pamphlet by Professor Peck, “Mushrooms and Their Uses.” This seemed to be the one that we could comprehend most easily, and so, armed with it, and another pamphlet by Professor Underwood, called “Suggestions to Collectors of Fleshy Fungi,” which contained a simple key, we started out to make discoveries. We afterward procured some publications of Mr. C. G. Lloyd, which were of great assistance, and lastly a glossary published by the Boston Mycological Society, a necessary addition to our library.

We found Professor Peck’s book was confined to edible mushrooms, and it soon became too limited to satisfy our craving for further knowledge—it incited a longing to know something of inedible fungi.

The rest is soon told. We were advised to get either a copy of Stevenson’s “British Fungi” or of Massee’s works. We did so, but found them too advanced to be readily used by the unlearned. Then the idea arose, How can we help others in their difficulties? This little book is the answer. It will not be of use to advanced students, they will only criticise and discover how much has been left unsaid; but the beginner is more easily satisfied with the extent of information gained, and if a taste for knowledge is encouraged the object of this book is attained.

This explanation will also account for the use of simple terms. We find a tiny fungus which looks like a brownish bird’s nest, with some miniature eggs in it, or a shining white mushroom, and we are told its name in Latin; it is described in terms meaningless to the ignorant, we lose interest, and our attention flags. We began for pleasure and recreation, but it became irksome and fatiguing, and the subject which might have amused us and helped to pass many an idle hour is put aside and abandoned. Yet this study is a most fascinating one. We all long for pleasant subjects of thought in our leisure hours, and there can be nothing more diverting and absorbing than the investigation of the beautiful and familiar plants around us....