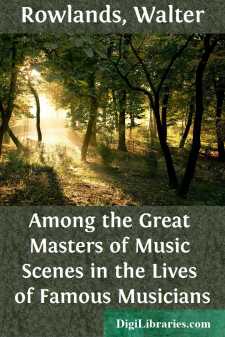 AMONG THE GREATMASTERS OF MUSIC. ST. CECILIA.

One of the most ancient legends handed down to us by the early Church is that of St. Cecilia, the patroness of music and musicians. She is known to have been honoured by Christians as far back as the third century, in which she is supposed to have lived.

Doubtless much of fancy has been added, in all the ensuing years, to the facts of Cecilia's life and death. Let us, however, take the legend as it stands. It says that St. Cecilia was a noble Roman lady, who lived in the reign of the Emperor Alexander Severus. Her parents, who secretly professed Christianity, brought her up in their own faith, and from her earliest childhood she was remarkable for her enthusiastic piety: she carried night and day a copy of the Gospel concealed within the folds of her robe; and she made a secret but solemn vow to preserve her chastity, devoting herself to heavenly things, and shunning the pleasures and vanities of the world. As she excelled in music, she turned her good gift to the glory of God, and composed hymns, which she sang herself with such ravishing sweetness, that even the angels descended from heaven to listen to her, or to join their voices with hers. She played on all instruments, but none sufficed to breathe forth that flood of harmony with which her whole soul was filled; therefore she invented the organ, consecrating it to the service of God. When she was about sixteen, her parents married her to a young Roman, virtuous, rich, and of noble birth, named Valerian. He was, however, still in the darkness of the old religion. Cecilia, in obedience to her parents, accepted the husband they had ordained for her; but beneath her bridal robes she put on a coarse garment of penance, and, as she walked to the temple, renewed her vow of chastity, praying to God that she might have strength to keep it. And it so fell out; for, by her fervent eloquence, she not only persuaded her husband, Valerian, to respect her vow, but converted him to the true faith. She told him that she had a guardian angel who watched over her night and day, and would suffer no earthly lover to approach her. And when Valerian desired to see this angel, she sent him to seek the aged St. Urban, who, being persecuted by the heathen, had sought refuge in catacombs. After listening to the instructions of that holy man, the conversion of Valerian was perfected, and he was baptised. Returning then to his wife, he heard, as he entered, the most entrancing music; and, on reaching her chamber, beheld an angel, who was standing near her, and who held in his hand two crowns of roses gathered in Paradise, immortal in their freshness and perfume, but invisible to the eyes of unbelievers. With these he encircled the brows of Cecilia and Valerian, as they knelt before him; and he said to Valerian, "Because thou hast followed the chaste counsel of thy wife, and hast believed her words, ask what thou wilt, it shall be granted to thee." And Valerian replied, "I have a brother named Tiburtius, whom I love as my own soul; grant that his eyes, also, may be opened to the truth." And the angel replied, with a celestial smile, "Thy request, O Valerian, is pleasing to God, and ye shall both ascend to his presence, bearing the palm of martyrdom." And the angel, having spoken these words, vanished....