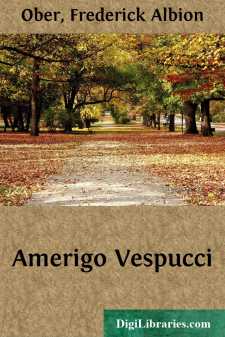 Cradled in the valley of the Arno, its noble architecture fitly supplementing its numerous natural charms, lies the Tuscan city of Florence, the birthplace of immortal Dante, the early home of Michael Angelo, the seat of the Florentine Medici, the scene of Savonarola's triumphs and his tragic end. Fame has come to many sons of Florence, as poets, statesmen, sculptors, painters, travellers; but perhaps none has achieved a distinction so unique, apart, and high as the subject of this volume, after whom the continents of the western hemisphere were named.

Amerigo Vespucci was born in Florence, March 9, 1451, just one hundred and fifty years after Dante was banished from the city in which both first saw the light. The Vespucci family had then resided in that city more than two hundred years, having come from Peretola, a little town adjacent, where the name was highly regarded, as attached to the most respected of the Italian nobility. Following the custom of that nobility, during the period of unrest in Italy, the Vespuccis established themselves in a stately mansion near one of the city gates, which is known as the Porta del Prato. Thus they were within touch of the gay society of Florence, and could enjoy its advantages, while at the same time in a position, in the event of an uprising, to flee to their estates and stronghold in the country.

While the house in which Christopher Columbus was born remains unidentified, and the year of his birth undecided, no such ambiguity attaches to the place and year of Vespucci's nativity. Above the doorway of the mansion which "for centuries before the discovery of America was the dwelling-place of the ancestors of Amerigo Vespucci, and his own birthplace," a marble tablet was placed, in the second decade of the eighteenth century, bearing the following inscription:

"To Americo Vespuccio, a noble Florentine,Who, by the discovery of America,Rendered his own and his Country's name illustrious,[As] the Amplifier of the World.Upon this ancient mansion of the Vespucci,Inhabited by so great a man,The holy fathers of Saint John of GodHave placed this Tablet, sacred to his memory.a.d. 1719."

At that time, about midway between the date of Vespucci's death and the present, the evidence was strong and continuous as to the residence in that building (which was then used as a hospital) of the family whose name it commemorates. Here was born, in 1451, the third son of Anastasio and Elizabetta Vespucci, whose name, whether rightly or not, was to be bestowed upon a part of the world at that time unknown.

The Vespuccis were then aristocrats, with a long and boasted lineage, but without great wealth to support their pretensions. They were relatively poor; they were proud; but they were not ashamed to engage in trade. Some of their ancestors had filled the highest offices within the gift of the state, such as prioris and gonfalonieres, or magistrates and chief magistrates, while the first of the Vespuccis known to have borne the prænomen Amerigo was a secretary of the republic in 1336.

It is incontestable that Amerigo Vespucci was well-born, and in his youth received the advantages of an education more thorough than was usually enjoyed by the sons of families which had "the respectability of wealth acquired in trade," and even the prestige of noble connections....