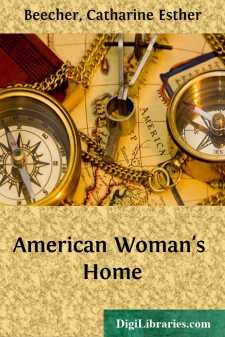 The authors of this volume, while they sympathize with every honest effort to relieve the disabilities and sufferings of their sex, are confident that the chief cause of these evils is the fact that the honor and duties of the family state are not duly appreciated, that women are not trained for these duties as men are trained for their trades and professions, and that, as the consequence, family labor is poorly done, poorly paid, and regarded as menial and disgraceful.

To be the nurse of young children, a cook, or a housemaid, is regarded as the lowest and last resort of poverty, and one which no woman of culture and position can assume without loss of caste and respectability.

It is the aim of this volume to elevate both the honor and the remuneration of all the employments that sustain the many difficult and sacred duties of the family state, and thus to render each department of woman's true profession as much desired and respected as are the most honored professions of men.

When the other sex are to be instructed in law, medicine, or divinity, they are favored with numerous institutions richly endowed, with teachers of the highest talents and acquirements, with extensive libraries, and abundant and costly apparatus. With such advantages they devote nearly ten of the best years of life to preparing themselves for their profession; and to secure the public from unqualified members of these professions, none can enter them until examined by a competent body, who certify to their due preparation for their duties.

Woman's profession embraces the care and nursing of the body in the critical periods of infancy and sickness, the training of the human mind in the most impressible period of childhood, the instruction and control of servants, and most of the government and economies of the family state. These duties of woman are as sacred and important as any ordained to man; and yet no such advantages for preparation have been accorded to her, nor is there any qualified body to certify the public that a woman is duly prepared to give proper instruction in her profession.

This unfortunate want, and also the questions frequently asked concerning the domestic qualifications of both the authors of this work, who have formerly written upon such topics, make it needful to give some account of the advantages they have enjoyed in preparation for the important office assumed as teachers of woman's domestic duties.

The sister whose name is subscribed is the eldest of nine children by her own mother, and of four by her step-mother; and having a natural love for children, she found it a pleasure as well as a duty to aid in the care of infancy and childhood. At sixteen, she was deprived of a mother, who was remarkable not only for intelligence and culture, but for a natural taste and skill in domestic handicraft. Her place was awhile filled by an aunt remarkable for her habits of neatness and order, and especially for her economy. She was, in the course of time, replaced by a stepmother, who had been accustomed to a superior style of housekeeping, and was an expert in all departments of domestic administration.

Under these successive housekeepers, the writer learned not only to perform in the most approved manner all the manual employments of domestic life, but to honor and enjoy these duties.

At twenty-three, she commenced the institution which ever since has flourished as "The Hartford Female Seminary," where, at the age of twelve, the sister now united with her in the authorship of this work became her pupil, and, after a few years, her associate....