American Slave Trade or, An Account of the Manner in which the Slave Dealers take Free People from some of the United States of America, and carry them away, and sell them as Slaves in other of the States; and of the horrible Cruelties practised in the carrying on of this most infamous Traffic 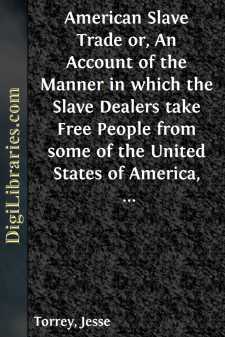 "And he that stealeth a man, and selleth him, or if he be found in his hand, shall surely be put to death."

1. Throughout this work I have numbered the paragraphs, a practice which I find to be attended with numerous advantages. The work was published in Philadelphia in 1817.

2. The reader will perceive, that Mr. Torrey, the author of the work here presented to the public, has mixed his reflections with his narrative of facts. A different arrangement would have tended to clearness. But, as applicable to the English reader, there is a defect of greater importance; namely, the want of a description of the relative extent and situation of the Countries or States, in which this abominable slave trade is carried on. The author speaks of the Middle States, and the Southern States. He speaks of Maryland, of Delaware; and, then again, of Georgia, Carolina, Mississippi; but the English reader ought to be told, and have pretty clearly explained to him, how these several Countries lie with regard to each other; and, that he may judge of the magnitude of the evil, he ought to be informed over how large a part of the whole of the United States Slavery does actually extend. He ought further to be informed of the nature of the Governments, and of the laws, as far as these latter relate to Slavery. For, he must otherwise naturally be astonished to find that this dreadful traffic is carried on with impunity. He hears Mr. Torrey talk of Judges, Senators, Governors, Presidents, speaking against this traffic; and yet he finds it most vigorously carried on; and actually making a part of the internal trade of the Country; at which he is utterly astounded, so often hearing the virtues of Republicans sounded in his ears, and being informed that Mr. Jeremy Bentham is actually engaged, at this moment, in the Southern Peninsula of Europe, to teach the art of Constitution-making upon the American plan. The book stands, therefore, in need of a Preface to explain these matters a little; and such Preface I am now doing myself the honour to write.

3. For want of a map, I must resort to a description by words. The States lie in the following order, along the side of the Atlantic from North to South, Maine, New Hampshire, Massachusetts, Rhode Island, Connecticut. The four latter are called the New England States, Maine being a new territory or State lying to the North and going on to the British territory of New Brunswick. After Connecticut, going on to the Southward, come New York, New Jersey, Pennsylvania, Delaware and Maryland. These five are called the Middle States. Then come, on to the Southward, Virginia, North Carolina, South Carolina, Georgia and the Floridas. These are called the Southern States. Then, going back to the North again, Vermont lies in at the back of the four New England States, on the western side of a long ridge of mountains. At the back of Pennsylvania are the States of Ohio, Indiana, and the district of the ill-fated creatures that have followed Mr. Birkbeck, called the Illinois. At the back of Virginia is Kentucky, at the back of North Carolina is Tennessee, at the back of South Carolina and Georgia and Florida are Alabama, Mississippi and Louisiana....