American Prisoners of the Revolution 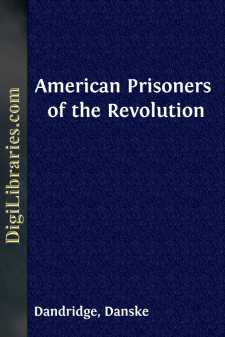 It is with no desire to excite animosity against a people whose blood is in our veins that we publish this volume of facts about some of the Americans, seamen and soldiers, who were so unfortunate as to fall into the hands of the enemy during the period of the Revolution. We have concealed nothing of the truth, but we have set nothing down in malice, or with undue recrimination.

It is for the sake of the martyrs of the prisons themselves that this work has been executed. It is because we, as a people, ought to know what was endured; what wretchedness, what relentless torture, even unto death, was nobly borne by the men who perished by thousands in British prisons and prison ships of the Revolution; it is because we are in danger of forgetting the sacrifice they made of their fresh young lives in the service of their country; because the story has never been adequately told, that we, however unfit we may feel ourselves for the task, have made an effort to give the people of America some account of the manner in which these young heroes, the flower of the land, in the prime of their vigorous manhood, met their terrible fate.

Too long have they lain in the ditches where they were thrown, a cart-full at a time, like dead dogs, by their heartless murderers, unknown, unwept, unhonored, and unremembered. Who can tell us their names? What monument has been raised to their memories?

It is true that a beautiful shaft has lately been erected to the martyrs of the Jersey prison ship, about whom we will have very much to say. But it is improbable that even the place of interment of the hundreds of prisoners who perished in the churches, sugar houses, and other places used as prisons in New York in the early years of the Revolution, can now be discovered. We know that they were, for the most part, dumped into ditches dug on the outskirts of the little city, the New York of 1776. These ditches were dug by American soldiers, as part of the entrenchments, during Washington's occupation of Manhattan in the spring of 1776. Little did these young men think that they were, in some cases, literally digging a grave for themselves.

More than a hundred and thirty years have passed since the victims of Cunningham's cruelty and rapacity were starved to death in churches consecrated to the praise and worship of a God of love. It is a tardy recognition that we are giving them, and one that is most imperfect, yet it is all that we can now do. The ditches where they were interred have long ago been filled up, built over, and intersected by streets. Who of the multitude that daily pass to and fro over the ground that should be sacred ever give a thought to the remains of the brave men beneath their feet, who perished that they might enjoy the blessings of liberty?

Republics are ungrateful; they have short memories; but it is due to the martyrs of the Revolution that some attempt should be made to tell to the generations that succeed them who they were, what they did, and why they suffered so terribly and died so grimly, without weakening, and without betraying the cause of that country which was dearer to them than their lives....