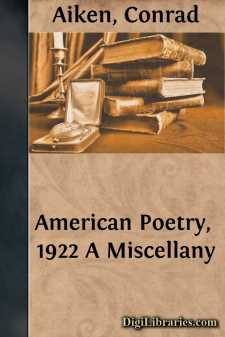 When the first Miscellany of American Poetry appeared in 1920, innumerable were the questions asked by both readers and reviewers of publishers and contributors alike. The modest note on the jacket appeared to satisfy no one. The volume purported to have no editor, yet a collection without an editor was pronounced preposterous. It was obviously not the organ of a school, yet it did not seem to have been compiled to exploit any particular phase of American life; neither Nature, Love, Patriotism, Propaganda, nor Philosophy could be acclaimed as its reason for being, and it was certainly not intended, as has been so frequent of late, to bring a cheerful absence of mind to the world-weary during an unoccupied ten minutes. Again, it was exclusive not inclusive, since its object was, evidently, not the meritorious if impossible one of attempting to be a compendium of present-day American verse.

But the publisher's note had stated one thing quite clearly, that the Miscellany was to be a biennial. Two years have passed, and with the second volume it has seemed best to state at once the reasons which actuated its contributors to join in such a venture.

In the first place, the plan of the Miscellany is frankly imitative. For some years now there has been published in England an anthology entitled Georgian Poetry. The Miscellany is intended to be an American companion to that publication. The dissimilarities of temperament, range and choice of subjects are manifest, but the outstanding difference is this: Georgian Poetry has an editor, and the poems it contains may be taken as that editor's reaction to the poetry of the day. The Miscellany, on the other hand, has no editor; it is no one person's choice which forms it; it is not an attempt to throw into relief any particular group or stress any particular tendency. It does disclose the most recent work of certain representative figures in contemporary American literature. The poets who appear here have come together by mutual accord and, although they may invite others to join them in subsequent volumes as circumstance dictates, each one stands (as all newcomers also must stand) as the exponent of fresh and strikingly diverse qualities in our native poetry. It is as if a dozen unacademic painters, separated by temperament and distance, were to arrange to have an exhibition every two years of their latest work. They would not pretend that they were the only painters worthy of a public showing; they would maintain that their work was, generally speaking, most interesting to one another. Their gallery would necessarily be limited; but it would be flexible enough to admit, with every fresh exhibit, three or four new members who had achieved an importance and an idiom of their own. This is just what the original contributors to the Miscellany have done.

The newcomers—H. D., Alfred Kreymborg, and Edna St. Vincent Millay—have taken their places with the same absence of judge or jury that marks any "society of independents." There is no hanging committee; no organizer of "position." Two years ago the alphabet determined the arrangement; this time seniority has been the sole arbiter of precedence. Furthermore—and this can not be too often repeated—there has been no editor. To be painstakingly precise, each contributor has been his own editor. As such, he has chosen his own selections and determined the order in which they are to be printed, but he has had no authority over either the choice or grouping of his fellow exhibitors' contributions. To one of the members has been delegated the merely mechanical labors of assembling, proof-reading, and seeing the volume through the press. The absence of E. A. Robinson from this year's Miscellany is a source of regret not only to all the contributors but to the poet himself. Mr. Robinson has written nothing since his Collected Poems with the exception of a long poem—a volume in itself—but he hopes to appear in any subsequent collection.

It should be added that this is not a haphazard anthology of picked-over poetry. The poems that follow are new. They are new not only in the sense that (with two exceptions) they cannot be found in book form, but most of them have never previously been published....