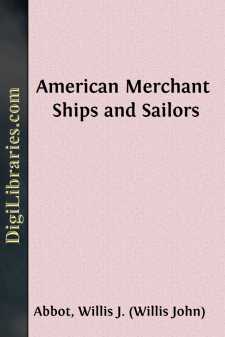 The American Ship and the American Sailor—New England's Lead on the Ocean—The Earliest American Ship-Building—How the Shipyards Multiplied—Lawless Times on the High Seas—Ship-Building in the Forests and on the Farm—Some Early Types—The Course of Maritime Trade—The First Schooner and the First Full-Rigged Ship—Jealousy and Antagonism of England—The Pest of Privateering—Encouragement from Congress—The Golden Days of Our Merchant Marine—Fighting Captains and Trading Captains—Ground Between France and England—Checked by the Wars—Sealing and Whaling—Into the Pacific—How Yankee Boys Mounted the Quarter-deck—Some Stories of Early Seamen—The Packets and Their Exploits.

When the Twentieth Century opened, the American sailor was almost extinct. The nation which, in its early and struggling days, had given to the world a race of seamen as adventurous as the Norse Vikings had, in the days of its greatness and prosperity turned its eyes away from the sea and yielded to other people the mastery of the deep. One living in the past, reading the newspapers, diaries and record-books of the early days of the Nineteenth Century, can hardly understand how an occupation which played so great a part in American life as seafaring could ever be permitted to decline. The dearest ambition of the American boy of our early national era was to command a clipper ship—but how many years it has been since that ambition entered into the mind of young America! In those days the people of all the young commonwealths from Maryland northward found their interests vitally allied with maritime adventure. Without railroads, and with only the most wretched excuses for post-roads, the States were linked together by the sea; and coastwise traffic early began to employ a considerable number of craft and men. Three thousand miles of ocean separated Americans from the market in which they must sell their produce and buy their luxuries. Immediately upon the settlement of the seaboard the Colonists themselves took up this trade, building and manning their own vessels and speedily making their way into every nook and corner of Europe. We, who have seen, in the last quarter of the Nineteenth Century, the American flag the rarest of all ensigns to be met on the water, must regard with equal admiration and wonder the zeal for maritime adventure that made the infant nation of 1800 the second seafaring people in point of number of vessels, and second to none in energy and enterprise.

New England early took the lead in building ships and manning them, and this was but natural since her coasts abounded in harbors; navigable streams ran through forests of trees fit for the ship-builder's adze; her soil was hard and obdurate to the cultivator's efforts; and her people had not, like those who settled the South, been drawn from the agricultural classes. Moreover, as I shall show in other chapters, the sea itself thrust upon the New Englanders its riches for them to gather....