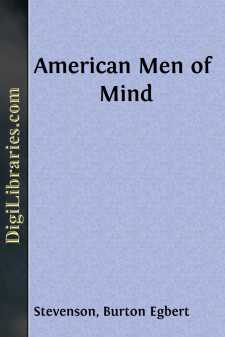 In the companion volume of this series, "Men of Action," the attempt was made to give the essential facts of American history by sketching in broad outline the men who made that history—the discoverers, pioneers, presidents, statesmen, soldiers, and sailors—and describing the part which each of them played.

It was almost like watching a great building grow under the hands of the workmen, this one adding a stone and that one adding another; but there was one great difference. For a building, the plans are made carefully beforehand, worked out to the smallest detail, and followed to the letter, so that every stone goes exactly where it belongs, and the work of all the men fits together into a complete and perfect whole. But when America was started, no one had more than the vaguest idea of what the finished result was to be; indeed, many questioned whether any enduring structure could be reared on a foundation such as ours. So there was much useless labor, one workman tearing down what another had built, and only a few of them working with any clear vision of the future.

The convention which adopted the Constitution of the United States may fairly be said to have furnished the first plan, and George Washington was the master-builder who laid the foundations in accordance with it. He did more than that, for the plan was only a mere outline; so Washington added such details as he found necessary, taking care always that they accorded with the plan of the founders. He lived long enough to see the building complete in all essential details, and to be assured that the foundation was a firm one and that the structure, which is called a Republic, would endure.

All that has been done since his time has been to build on an addition now and then, as need arose, and to change the ornamentation to suit the taste of the day. At one time, it seemed that the whole structure might be rent asunder and topple into ruins; but again there came a master-builder named Abraham Lincoln, and with the aid of a million devoted workmen who rallied to his call, he saved it.

There have been men, and there are men to-day, who would attack the foundation were they permitted; but never yet have they got within effective striking distance. Others there are who have marred the simple and classic beauty of the building with strange excrescences. But these are only temporary, and the hand of time will sweep them all away. For the work of tearing down and building up is going forward to-day just as it has always done; and the changes are sometimes for the better and sometimes for the worse; but, on the whole, the building grows more stately and more beautiful as the generations pass.

It was the work of the principal laborers on this mighty edifice which we attempted to judge in "Men of Action," and this was a comparatively easy task, because the work stands out concretely for all to see, and, as far as essentials go, at least, we are all agreed as to what is good work and what is bad....