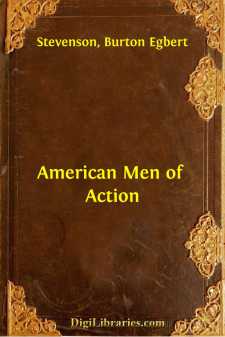 CHAPTER I A TALK ABOUT BIOGRAPHY

No doubt most of you think biography dull reading. You would much rather sit down with a good story. But have you ever thought what a story is? It is nothing but a bit of make-believe biography.

Let us see, in the first place, just what biography means. It is formed from two Greek words, "bios," meaning life, and "graphein," meaning to write: life-writing. In other words, a biography is the story of the life of some individual. Now what the novelist does is to write the biographies of the people of his story; not usually from the cradle to the grave, but for that crucial period of their careers which marked some great success or failure; and he tries to make them so life-like and natural that we will half-believe they are real people, and that the things he tells about really happened. Sometimes, to accomplish this, he even takes the place of one of his own characters, and tells the story in the first person, as Dickens does in "David Copperfield." That is called autobiography, which is merely a third Greek word, "autos," meaning self, added to the others. An automobile, for instance, is a self-moving vehicle. So autobiography is the biography of oneself. The great aim of the novelist is, by any means within his power, to make his tale seem true, and the truer it is—the truer to human nature and the facts of life—the greater is his triumph.

Now why is it that everyone likes to read these make-believe biographies? Because we are all interested in what other people are doing and thinking, and because a good story tells in an entertaining way about life-like people, into whom the story-teller has breathed something of his own personality. Then how does it come that so few of us care to read the biographies of real people, which ought to be all the more interesting because they are true instead of make-believe? Well, in the first place, because most of us have never tried to read biography in the right way, and so think it tiresome and uninteresting. Haven't you, more than once, made up your mind that you wouldn't like a thing, just from the look of it, without ever having tasted it? You know the old proverb, "One man's food is another man's poison." It isn't a true proverb—indeed, few proverbs are true—because we are all built alike, and no man's food will poison any other man; although the other man may think so, and may really show all the symptoms of poisoning, just because he has made up his mind to.

Most of you approach biography in that way. You look through the book, and you see it isn't divided up into dialogue, as a story is, and there are no illustrations, only pictures of crabbed-looking people, and so you decide that you are not going to like it, and consequently you don't like it, no matter how likeable it is.

It isn't wholly your fault that you have acquired this feeling. Strangely enough, most biographies give no such impression of reality as good fiction does. John Ridd, for instance, is more alive for most of us than Thomas Jefferson—the one is a flesh-and-blood personality, while the other is merely a name....