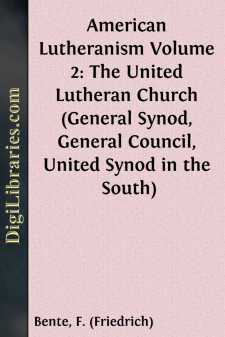 1. Origin of the New Body.—On April 18, 1917, at Philadelphia, the Joint Quadricentennial Committee, appointed by the General Synod, the General Council, and the United Synod in the South to arrange for a union celebration of the Reformation, decided that the merging of the three affiliated general bodies would be "the fittest commemoration and noblest memorial of the four-hundredth Reformation Jubilee." Accordingly, the presidents of these bodies, being present, were requested to form a joint committee, which should prepare a constitution for a united Church and present the same to the three general bodies for their consideration, and, if approved, for submission to the District Synods. The constitution, framed by the committee, was in the same year adopted by all of the three general bodies, the General Synod, which, in 1820, had been founded for the express purpose of uniting all Lutheran synods in America, being the first to assent to the Merger during its session at Chicago, June 20 to 27, 1917. The various District Synods also having approved of the union and having ratified the constitution, the Merger was consummated at New York City, November 15, 1918. Dr. F. H. Knubel, a member of the General Synod, was elected President of the new body— "The United Lutheran Church in America." Of the total number of Lutherans in America (63 synods, 15,243 congregations, 9,790 pastors, 2,450,000 confirmed and 3,780,000 baptized members) the United Church embraces 45 synods, 10 theological seminaries with 46 professors and 267 students, 17 colleges, 6 academies, 3,747 congregations and mission-posts, 2,754 pastors, almost 1,000,000 baptized members, and 758,000 confirmed members, the General Synod contributing 364,000, the General Council 340,000, and the United Synod in the South 53,000. The United Church is the second largest Lutheran body in America, the Synodical Conference outnumbering it by only about 50,000 confirmed members. The merged bodies will continue to exist legally until no property rights are imperiled. In 1919 it was decided to consolidate the Lutheran, the Lutheran Church Work and Observer, and the Lutheran Church Visitor. The new church-paper will be The Lutheran, with Dr. G. W. Sandt as editor-in-chief.

2. Refusing to Enter the Merger.—The United Lutheran Church, according to the Lutheran, "has inaugurated a new era of progress for our beloved Lutheran Church. . . . Three names have gone down, but a new and greater name has arisen from their ashes." This, however, was not the view of the Iowa and Augustana synods, though both indirectly, through their connection with the General Council, had for years been in church-fellowship also with the General Synod, hence, consistently might have entertained scruples to join the Merger no more than the Council. When, at Philadelphia, October 25, 1917, the General Council passed on the Merger, Dr. M. Reu, the representative of the Iowa Synod, was the only delegate (advisory) who voted against it....