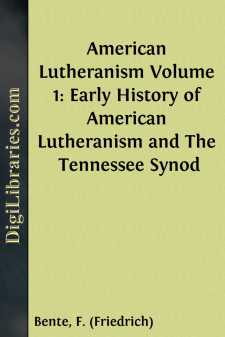 PREFACE. Essentially, Christianity is the special divine faith in the truth revealed by the Bible that we are saved, not by our own efforts, works, or merits, but alone by the pure and unmerited grace of God, secured by Christ Jesus and freely offered in the Gospel. And the Christian Church is the sum total of all those who truly believe, and therefore confess and propagate this truth of the Gospel.

Accordingly, the history of Christianity and of the Christian Church is essentially the record concerning this truth, viz., how, when, where, by whom, with what success and consistency, etc., it has been proclaimed, received, rejected, opposed, defended, corrupted, and restored again to its original purity.

Lutheranism is not Christianity plus several ideas or modifications of ideas added by Luther, but simply Christianity, consistent Christianity, neither more nor less. And the Lutheran Church is not a new growth, but merely the restoration of the original Christian Church with its apostolic, pure confession of the only saving Christian truth and faith.

The history of Lutheranism and of the Lutheran Church, therefore, is essentially the story concerning the old Christian truth, restored by Luther, viz., how, by whom, where, when, etc., this truth was promulgated, embraced, rejected, condemned, defended, corrupted, and restored again to pristine purity.

The modified Lutheranism advocated during the middle of the nineteenth century as "American Lutheranism" was a misnomer, for in reality it was neither American nor Lutheran, but a sectarian corruption of both.

Hence, also, the history of American Lutheranism is but the record of how the Christian truth, restored by Luther, was preached and accepted, opposed and defended, corrupted and restored, in our country, at various times, by various men, in various synods and congregations.

In the history of American Lutheranism four names are of special significance: Muhlenberg, Schmucker, Walther, Krauth.

H. M. Muhlenberg endeavored to transplant to America the modified Lutheranism of the Halle Pietists. S. S. Schmucker's ambition was to transmogrify the Lutheran Church into an essentially unionistic Reformed body. C. F. Walther labored most earnestly and consistently to purge American Lutheranism of its foreign elements, and to restore the American Lutheran Church to its original purity, in doctrine as well as in practise. In a similar spirit Charles Porterfield Krauth devoted his efforts to revive confessional Lutheranism within the English portion of our Church....