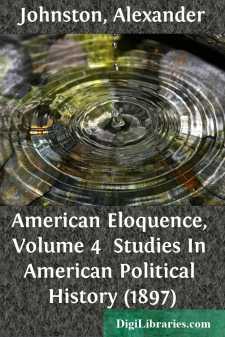 INTRODUCTION TO THE FOURTH VOLUME.

The fourth and last volume of the American Eloquent e deals with four great subjects of discussion in our history,—the Civil War and Reconstruction, Free Trade and Protection, Finance, and Civil Service Reform. In the division on the Civil War there has been substituted in the new edition, for Mr. Schurz's speech on the Democratic War Policy the spirited discussion between Breckenridge and Baker on the suppression of insurrection. The scene in which these two speeches were delivered in the United States Senate at the opening of the Civil war is full of historic and dramatic interest, while the speeches themselves are examples of superior oratory. Mr. Schurz appears to advantage in another part of the volume in his address on Civil Service Reform.

The speeches of Thaddeus Stevens and Henry J. Raymond, delivered at the opening of the Reconstruction struggle under President Johnson, are also new material in this edition. They are fairly representative of two distinct views in that period of the controversy. These two speeches are substituted for the Garfield-Blackburn discussion over a "rider" to an appropriation bill designed to forbid federal control of elections within the States. This discussion was only incidental to the problem of reconstruction, and may be said to have occurred at a time (1879) subsequent to the close of the Reconstruction period proper.

The material on Free Trade and Protection has been left unchanged for the reason that it appears to the present editor quite useless to attempt to secure better material on the tariff discussion. There might be added valuable similar material from later speeches on the tariff, but the two speeches of Clay and Hurd may be said to contain the essential merits of the long-standing tariff debate.

The section of the volume devoted to Finance and Civil Service Reform is entirely new. The two speeches of Curtis and Schurz are deemed sufficient to set forth the merits of the movement for the reform of the Civil Service. The magnitude of our financial controversies during a century of our history precludes the possibility of securing an adequate representation of them in speeches which might come within the scope of such a volume as this. It has, therefore, seemed best to the editor to confine the selections on Finance to the period since the Civil War, and to the subject of coinage, rather than to attempt to include also the kindred subjects of banking and paper currency. The four representative speeches on the coinage will, however, bring into view the various principles of finance which have determined the differences and divisions in party opinion on all phases of this great subject.

THE transformation of the original secession movement into a de facto nationality made war inevitable, but acts of war had already taken place, with or without State authority. Seizures of forts, arsenals, mints, custom-houses, and navy yards, and captures of Federal troops, had completely extinguished the authority of the United States in the secession area, except at Fort Sumter in South Carolina, and Fort Pickens and the forts at Key West in Florida; and active operations to reduce these had been begun....