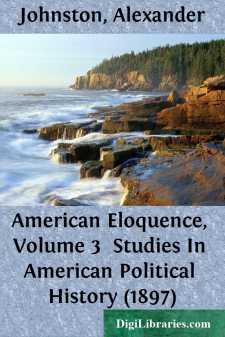 INTRODUCTION TO THE REVISED VOLUME.

The third volume of the American Eloquence is devoted to the continuation of the slavery controversy and to the progress of the secession movement which culminated in civil war.

To the speeches of the former edition of the volume have been added: Everett on the Nebraska bill; Benjamin on the Property Doctrine and Slavery in the Territories; Lincoln on the Dred Scott Decision; Wade on Secession and the State of the Union; Crittenden on the Crittenden Compromise; and Jefferson Davis's notable speech in which he took leave of the United State Senate, in January, 1861.

Judged by its political consequences no piece of legislation in American history is of greater historical importance than the Kansas-Nebraska bill. By that act the Missouri Compromise was repealed and the final conflict entered upon with the slave power. In addition to the speeches of Douglas and Chase, representing the best word on the opposing sides of the famous Nebraska controversy, the new volume includes the notable contribution by Edward Everett to the Congressional debates on that subject. Besides being an orator of high rank and of literary renown, Everett represented a distinct body of political opinion. As a conservative Whig he voiced the sentiment of the great body of the followers of Webster and Clay who had helped to establish the Compromise of 1850 and who wished to leave that settlement undisturbed. The student of the Congressional struggles of 1854 will be led by a speech like that of Everett to appreciate that moderate and conservative spirit toward slavery which would not persist in any anti-slavery action having a tendency to disturb the harmony of the Union. That this conservative opinion looked upon the repeal of the Missouri Compromise as an act of aggression in the interest of slavery is indicated by Everett's speech, and this gives the speech its historic significance.

Judah P. Benjamin may be said to have been the ablest legal defender of slavery in public life during the decade of 1850-60. His speech on the right of property in slaves and the right of slavery to national protection in the territories was probably the ablest on that side of the controversy. Lincoln's speech on the Dred Scott Decision has been substituted for one by John C. Breckinridge on the same subject; this will serve to bring into his true proportions this great leader of the combined anti-slavery forces. No voice, in the beginnings of secession and disunion, could better reflect the positive and uncompromising Republicanism of the Northwest than that of Wade. The speech from him which we have appropriated is in many ways worthy of the attention of the historical student.