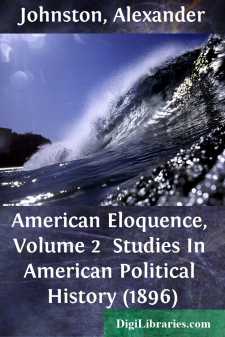 INTRODUCTION TO THE REVISED VOLUME II.

The second volume of the American Eloquence is devoted exclusively to the Slavery controversy. The new material of the revised edition includes Rufus King and William Pinkney on the Missouri Question; John Quincy Adams on the War Power of the Constitution over Slavery; Sumner on the Repeal of the Fugitive Slave Law. The addition of the new material makes necessary the reservation of the orations on the Kansas-Nebraska Bill, and on the related subjects, for the third volume.

In the anti-slavery struggle the Missouri question occupied a prominent place. In the voluminous Congressional material which the long debates called forth, the speeches of King and Pinkney are the best representatives of the two sides to the controversy, and they are of historical interest and importance. John Quincy Adams' leadership in the dramatic struggle over the right of petition in the House of Representatives, and his opinion on the constitutional power of the national government over the institution of slavery within the States, will always excite the attention of the historical student.

In the decade before the war no subject was a greater cause of irritation and antagonism between the States than the Fugitive Slave Law. Sumner's speech on this subject is the most valuable of his speeches from the historical point of view; and it is not only a worthy American oration, but it is a valuable contribution to the history of the slavery struggle itself. It has been thought desirable to include in a volume of this character orations of permanent value on these themes of historic interest. A study of the speeches of a radical innovator like Phillips with those of compromising conservatives like Webster and Clay, will lead the student into a comparison, or contrast, of these diverse characters. The volume retains the two orations of Phillips, the two greatest of all his contributions to the anti-slavery struggle. It is believed that the list of orations, on the whole, presents to the reader a series of subjects of first importance in the great slavery controversy.

The valuable introduction of Professor Johnston, on "The Anti-Slavery Struggle," is re-printed entire.

Negro slavery was introduced into all the English colonies of North America as a custom, and not under any warrant of law. The enslavement of the negro race was simply a matter against which no white person chose to enter a protest, or make resistance, while the negroes themselves were powerless to resist or even protest. In due course of time laws were passed by the Colonial Assemblies to protect property in negroes, while the home government, to the very last, actively protected and encouraged the slave trade to the colonies. Negro slavery in all the colonies had thus passed from custom to law before the American Revolution broke out; and the course of the Revolution itself had little or no effect on the system.

From the beginning, it was evident that the course of slavery in the two sections, North and South, was to be altogether divergent....