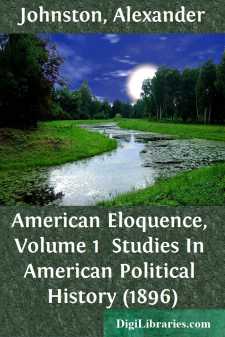 All authorities are agreed that the political history of the United States, beyond much that is feeble or poor in quality, has given to the English language very many of its most finished and most persuasive specimens of oratory. It is natural that oratory should be a power in a republic; but, in the American republic, the force of institutions has been reinforced by that of a language which is peculiarly adapted to the display of eloquence. Collections of American orations have been numerous and useful, but the copiousness of the material has always proved a source of embarrassment. Where the supply is so abundant, it is exceedingly difficult to make selections on any exact system, and yet impossible to include all that has a fair claim to the distinctive stamp of oratory. The results have been that our collections of public speeches have proved either unsatisfactory or unreasonably voluminous.

The design which has controlled the present collection has been to make such selections from the great orations of American history as shall show most clearly the spirit and motives which have actuated its leaders, and to connect them by a thread of commentary which shall convey the practical results of the conflicts of opinion revealed in the selections. In the execution of such a work much must be allowed for personal limitations; that which would seem representative to one would not seem at all representative to others. It will not be difficult to mark omissions, some of which may seem to mar the completeness of the work very materially; the only claim advanced is that the work has been done with a consistent desire to show the best side of all lines of thought which have seriously modified the course of American history. Some great names will be missed from the list of orators, and some great addresses from the list of orations; the apology for their omission is that they have not seemed to be so closely related to the current of American history or so operative upon its course as to demand their insertion. Any errors under this head have occurred in spite of careful consideration and anxious desire to be scrupulously impartial.

Very many of the orations selected have been condensed by the omission of portions which had no relevancy to the purpose in hand, or were of only a temporary interest and importance. Such omissions have been indicated, so that the reader need not be misled, while the effort has been made to so manage the omissions as to maintain a complete logical connection among the parts which have been put to use. A tempting method of preserving such a connection is, of course, the insertion of words or sentences which the speaker might have used, though he did not; but such a method seemed too dangerous and possibly too misleading, and it has been carefully avoided. None of the selections contain a word of foreign matter, with the exception of one of Randolph's speeches and Mr. Beecher's Liverpool speech, where the matter inserted has been taken from the only available report, and is not likely to mislead the reader....