Amateur Gardencraft A Book for the Home-Maker and Garden Lover 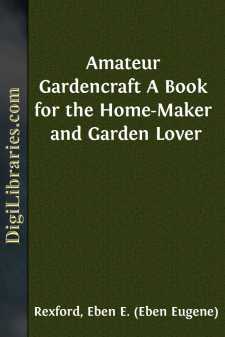 THE LAWN: HOW TO MAKE IT AND HOW TO TAKE CARE OF IT

HE owner of the average small home seldom goes to the expense of employing the professional gardener to do the work of lawn-making. Sometimes he cannot afford to do so. Sometimes skilled labor is not obtainable. The consequence is, in the majority of cases, the lawn,—or what, by courtesy, is called by that name,—is a sort of evolution which is an improvement on the original conditions surrounding the home, but which never reaches a satisfactory stage. We see such lawns everywhere—rough, uneven, bare in spots, anything but attractive in a general way, and but little better than the yard which has been given no attention, were it not for the shrubs and plants that have been set out in them. The probabilities are that if you ask the owner of such a place why he has no lawn worth the name, he will give one or the other of the reasons I have made mention of above as his excuse for the existing condition of things about the home. If you ask him why he has not undertaken the work himself, he will most likely answer that he lacks the knowledge necessary to the making of a fine lawn, and rather than experiment with it he has chosen to let it alone.

Now the fact is—lawn-making has nothing mysterious about it, as so many seem to think. It does not call for skilled labor. It need not be an expensive undertaking. Any man who owns a home that he desires to make the most of can make himself a lawn that will be quite as satisfactory, in nearly every instance, as the one made by the professional gardener—more so, in fact, since what we make for ourselves we appreciate much more than that which we hire made for us. The object of this paper is to assist home-makers in doing just this kind of work. I shall endeavor to make it so plain and practical that anyone so inclined can do all that needs doing in a satisfactory manner. It may not have that nicety of finish, when completed, that characterizes the work of the professional, but it will harmonize with its surroundings more perfectly, perhaps, and will afford us quite as much pleasure as the work of the expert.

If the house has just been built, very likely everything about it is in a more or less chaotic condition. Odds and ends of lumber, mortar, brick, and all kinds of miscellaneous building material scattered all over the place, the ground uneven, treeless, shrubless, and utterly lacking in all the elements that go to make a place pleasing and attractive. Out of this chaos order must be evolved, and the evolution may be satisfactory in every way—if we only begin right.

The first thing to do is to clear away all the rubbish that clutters up the place. Do not make the mistake of dumping bits of wood into hollows with the idea that you are making a good foundation for a lawn-surface. This wood will decay in a year or two, and there will be a depression there. Fill into the low places only such matter as will retain its original proportions, like brick and stone. Make kindling-wood of the rubbish from lumber, or burn it. Get rid of it in some way before you begin operations. What you want, at this stage of the proceedings, is a ground entirely free from anything that will interfere with grading the surface of it.

If the lot upon which the house stands is a comparatively level one—or rather, was, before the house was built—it is generally easy to secure a slope from the house on all sides, by filling in about the building with the soil thrown up from the cellar or in making excavation for the walls. If no excavation of any kind has been made—and quite often, nowadays, foundation walls are built on the ground instead of starting a foot or two below the surface,—a method never to be advised because of the risk of injury to the building from the action of frost in the soil,—it may be necessary to make the lot evenly level, unless one goes to the expense of filling in....