Allison Bain, or, By a Way she knew not 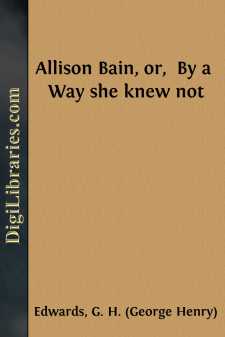 Mr Hadden was standing at the open door of the manse, waiting patiently, while his housekeeper adjusted his grey plaid on his shoulders in preparation for a long ride over the hills. His faithful Barbara was doing her part protesting, but she was doing it carefully and well.

“Such a day as it is!” said she. “Such a time of rain! Indeed, sir, I canna think it right for you to go so far. Mightna ye just bide still at home till they come to the kirkyard?”

But the minister shook his head. “I will need to go, Barbara. Think of poor Allison Bain on this sorrowful day.”

“Ay, poor Allie! I’m wae for her this sorrowful day, as ye say. Greatly she’ll need a good word spoken to her. But in a’ the rain—and at your age—”

“Ay! I am a good ten years older than the man we are to lay in the grave. I might, as ye say, meet them at the kirkyard, but I must see that desolate bairn. And I think it may be fair.”

It was June, but it looked more like November, so low lay the clouds, and so close hung the mist over all the valley. For a week the sun had hidden his face, and either in downpour or in drizzle, the rain had fallen unceasingly, till the burn which ran down between the hills had overflowed its banks and spread itself in shallow pools over the level fields below. The roads would be “soft and deep,” as Barbara said, and the way was long. But even as she spoke there was an opening in the clouds and the wind was “wearing round to the right airt,” for the promise of a fair day, and it was early yet.

“And rain or shine, I must go, Barbara, as ye see yourself. The powney is sure-footed. And my son Alexander is going with me, so there is nothing to fear.”

And so the two men set out together. “My son Alexander,” whose name the minister spoke with such loving pride, was the youngest and best beloved of the many sons and daughters who had been born and bred in the manse, of whom some were “scattered far and wide” and some were resting beside their mother in the kirkyard close at hand. In his youth, Alexander had given “some cause for anxiety to his father and mother,” as outside folk put it delicately, and he had gone away to America at last, to begin again—to make a man of himself, or to perish out of sight of their loving and longing eyes. That was more than fifteen years before this time, and he had not perished out of sight, as so many wanderers from loving homes have done. He had lived and struggled with varying fortunes for a time, but he had never failed once to write his half-yearly letter to his father and mother at home. The folk of the olden time did not write nor expect so many letters as are written and sent nowadays, and the father and mother lived hopefully on one letter till another came....