All He Knew A Story 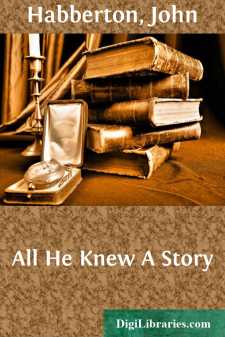 As the Capital Express train dashed into the village of Bruceton one bright afternoon, a brakeman passing through a car was touched on the shoulder by a man, who said,—

"The man that left this in the seat in front got out three stations back. You don't s'pose he'll want it again an' send back for it, do you?"

The brakeman looked at an object which the speaker held up as he spoke: it was a small fig-box, such as train-boys sometimes succeed in imposing upon the traveling public, and it still contained several figs.

"Want it again?" said the brakeman, with a scornful curl of the lip that gave his black moustache a Mephistophelian twist, "of course not. He left it there so's to get rid of it, like most of 'em do. I wouldn't buy one of them boxes of—"

The brakeman suddenly ceased talking, and put both hands on the passenger's shoulders with the movement peculiar to train-men whose duty it is to rouse sleeping passengers, the effect always being to make the victim throw his head slightly backward. Then the brakeman looked a moment into the face before him,—it was small, weak-eyed, and characterless,—and continued,—

"Why, Sam Kimper, I didn't know you from Adam! That broad-brimmed low hat makes you look like somebody else. When did you get out?"

"This mornin'," said the passenger, dropping his eyes.

"Did, eh? Well, you needn't feel so bad about it, old man. Anybody's likely to get in trouble once in a while, you know. You got catched; some other folks 'most always don't; that's about the difference. Let's see; how long was you—how long have you been away?"

"I was sent for two years an' a half," said the passenger, raising his head again and looking almost manly, "but, Mr. Briggs, I got all the shortenin' of time that's allowed for good conduct,—ev'ry day of it. If you don't believe it, I'll prove it to you. My term begun on the 11th of August, eighteen hundred an'—"

"Never mind the figures, old man: I'll take your word for it."

"But I wanted you to be sure; I thought mebbe you'd tell other folks about it, seein' you're a good-hearted feller, an' know ev'rybody, an' I never done you no harm."

"I'll tell 'em anyway," said the brakeman, cheerily; "I ain't no saint, but I'm always ready to help a fellow up when he's down. I've got to get to the rear now, to uncouple a car we have to leave here. S'long, Sam."

"Say, Mr. Briggs," said the passenger, hurrying along behind the brakeman, "you don't s'pose there's any chance for me to get a job in the railroad-company's yard, do you?"

The brakeman turned with a sharp look which speedily softened as he saw an earnest appeal in the little man's face.

"Well, Sam," he replied, his words dragging slowly along, "the yard's always full, an' men a-waitin'. You'd have to give bonds for good behavior, an' honesty, an'—"

"Never mind the rest, Mr. Briggs," said the ex-convict, shrinking an inch or two in stature. "I didn't know about that, indeed I didn't, or I—"

"Well, you needn't be a-Mr.-Briggs-in' me, anyhow," said the brakeman. "I was only Jim before—you left town, Sam, an' I want you to go on callin' me Jim, just the same. Do you understand that, confound you?"

"Here we are; good luck by the car-load to you, Sam." Then the brakeman looked back into the car and roared,—

The discharged prisoner consumed a great deal of time and distributed many furtive glances as he alighted, though he got off the train on the side opposite the little station....