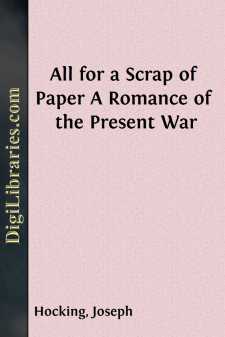 Events have moved so rapidly in our little town of St. Ia, that it is difficult to set them down with the clearness they deserve. We Cornish people are an imaginative race, just as all people of a Celtic origin are, but we never dreamed of what has taken place. One week we were sitting idly in our boats in the bay, the next our lads had heard the call of their country, and had hurried away in its defence. One day we were at peace with the world, the next we were at war with one of the greatest fighting nations in the world. At the end of July, little knowing of the correspondence taking place between Sir Edward Grey and the Ambassadors of Europe, we tended our flocks, prepared to garner our harvest, and sent out our fishing-boats; at the beginning of August we had almost forgotten these things in the wild excitement with which the news of war filled us. Placards headed by the Royal Arms were posted at public places, calling up Army and Navy Reserves, and fervent appeals were made to all our boys old enough to bear arms, to bid good-bye to home and loved ones, in order to help England to maintain her plighted word, and support her honour.

Not that we were in a state of panic, or fear, thank God. There was nothing of that. Neither were we in doubt as to the ultimate issue. We believed we had right on our side, and as our forefathers had fought in every stage of our country's history, we were prepared to fight again. But we Cornish are a quiet, Peace-loving people, and many of us hated, and still hate with a deadly hatred, the very thought of the bloody welter, the awful carnage, and the untold misery and suffering which war means.

But it is not of these things I have to write. My work is to tell the story of a lad I know, and love; the story, too, of a maid who loved him, and what this great war, which even yet seems only to have just begun, has meant to them.

It was on Monday, the twenty-ninth day of June in this present year, that Robert, or, as he is generally spoken of by his friends, Bob Nancarrow, got out his two-seater Renaud, and prepared to drive to Penwennack, the home of Admiral Tresize. Bob had but just "come down" from Oxford, and was now in great good spirits at the prospect before him.

This was scarcely to be wondered at, for Nancy Tresize had asked him to take her to Gurnard's Head, which, as all Cornish people know, is near to the town of St. Ia, and one of the most favoured spots in the county. Perhaps, too, the coast scenery around Gurnard's Head is among the finest in Cornwall, while Gurnard's Head itself, the great rock which throws itself, grim, black, and majestic, far out into the sea, challenges comparison with even Land's End itself.

But Bob was not thinking of scenery as he got out his car. His mind and heart were full of the thought that he was going to spend the afternoon with Nancy Tresize, the fairest girl in a county of fair women.

For years Bob had loved her—loved her with a love which seemed to him all the greater because it appeared to be hopeless....