All Afloat A Chronicle of Craft and Waterways 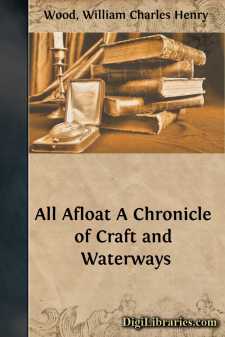 A LAND OF WATERWAYS

Canada is the child of the sea. Her infancy was cradled by her waterways; and the life-blood of her youth was drawn from oceans, lakes, and rivers. No other land of equal area has ever been so intimately bound up with the changing fortunes of all its different waters, coast and inland, salt and fresh.

The St Lawrence basin by itself is a thing to marvel at, for its mere stupendous size alone. Its mouth and estuary are both so vast that their salt waters far exceed those of all other river systems put together. Its tide runs farther in from the Atlantic than any other tide from this or any other ocean. And its 'Great Lakes' are appropriately known by their proud name because they contain more fresh water than all the world beside. Size for size, this one river system is so pre-eminently first in the sum of these three attributes that there is no competing second to be found elsewhere. It forms a class of its own. And well it may, even for its minor attributes, when the island of Newfoundland at its mouth exceeds the area of Ireland; when the rest of its mouth could contain Great Britain; when an arm of the true deep sea runs from Cabot Strait five hundred miles inland to where the Saguenay river soundings go down beyond an average of a hundred fathoms; and when, three hundred miles farther inland still, on an island in an archipelago at the mouth of the Ottawa, another tributary stream, there stands the city of Montreal, one of the greatest seaports in the world.

But mere size is not the first consideration. The Laurentian waters are much more important for their significance in every stage of national development. They were the highway to the heart of America long before the white man came. They remained the same great highway from Cartier to Confederation—a period of more than three hundred years. It is only half a century since any serious competition by road and rail began. Even now, in spite of this competition, they are one of the greatest of all highways. Nor does their significance stop here. Nature laid out the St Lawrence basin so that it not only led into the heart of the continent, but connected with every other system from the Atlantic to the Pacific and from the Tropics to the Polar sea. Little by little the pioneers found out that they could paddle and portage the same canoe, by inland routes, many thousands of miles to all four points of the compass: eastward to the Atlantic between the Bay of Fundy and New York; westward till, by extraordinary efforts, they passed up the giant Saskatchewan and through the mighty ranges that look on the Pacific; southward to the Mississippi and the Gulf of Mexico; northward to Hudson Bay, or down the Mackenzie to the Arctic ocean.

As settlement went on and Canada developed westwards along this unrivalled waterway man tried to complete for his civilized wants what nature had so well provided for his savage needs. There is a rise of six hundred feet between Lake St Peter and Lake Superior. So canals were begun early in the nineteenth century and gradually built farther and farther west, at a total cost of $125,000,000, till, by the end of the century, with the opening of the Canadian 'Soo,' the last artificial link was finished and direct navigation was established between the western end of Lake Superior at Duluth and the eastern end of the St Lawrence system at Belle Isle, a distance of no less than 2340 miles....