All Adrift or The Goldwing Club 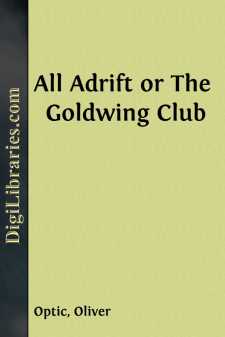 "All Adrift" is the first volume of a new set of books, to be known as "The Boat-Builder Series." The story contains the adventures of a boy who is trying to do something to help support the family, but who finds himself all adrift in the world. He has the reputation of being rather "wild," though he proves that he is honest, loves the truth, and is willing to work for a living. Having been born and brought up on the shore of Lake Champlain, he could not well avoid being a boatman, especially as his father was a pilot on a steamer. Nearly all the scenes of the story are on the water; and the boy shows not only that he can handle a boat, but that he has ingenuity, and fertility of resource.

The narrative of the hero's adventures contained in this volume is the introduction to the remaining volumes of the series, in which this boy and others are put in the way of obtaining a great deal of useful information, by which the readers of these books are expected to profit. Captain Royal Gildrock, a wealthy retired shipmaster, has some ideas of his own in regard to boys. He thinks that one great need of this country is educated mechanics, more skilled labor. He has the means to carry his ideas into practice, and actively engages in the work of instructing and building up the boys in a knowledge of the useful arts. He believes in religion, morality, and social and political virtue. He insists upon practice in addition to precept and theory, as well in the inculcation of the duties of social life as in mechanics and useful arts.

If the first volume is all story and adventure, those that follow it will not be wholly given up to the details of the mechanic arts. The captain has a steam-yacht; and the hero of the first story has a fine sailboat, to say nothing of a whole fleet of other craft belonging to the nabob. The boys are not of the tame sort: they are not of the humdrum kind, and they are inclined to make things lively. In fact, they are live boys, and the captain sometimes has his hands full in managing them.

With this explanation, the author sends out the first volume with the hope that this book and those which follow it will be as successful as their numerous predecessors in pleasing his young friends—and his old friends, he may add, as he treads the downhill of life.