All About Johnnie Jones 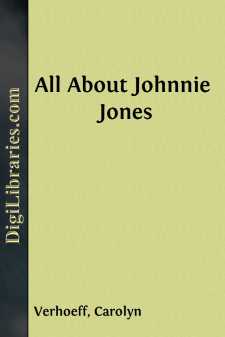 It gives me sincere pleasure to introduce to mothers and kindergartners a pioneer writer in the unexplored field of simple, realistic stories for little children.

Miss Verhoeff is a trained kindergartner who has brought to her profession a college training as well as a true devotion to children.

It was in one of the free kindergartens situated in the less fortunate localities of Louisville that the stories of Johnnie Jones came into being, and grew in response to the demand of the little ones for stories about real children.

In the beautiful world of fairy-lore we have a rich and splendidly exploited field of immortal literature. The old, old stories of fairies and elves, of giants and dwarfs, of genii, princes, and knights with their wonder-working wands, rings and swords, will never grow threadbare; while the spiritual, artistic and literary value of these stories in the life of child-imagination can never be overestimated. Enchanting and valuable as they are, however, they should not blind us to the need for standard realistic stories of equal literary and poetic merit.

A child needs not only the touch of the wonder-working wand which transports him to a land of fascinating unrealities, but also the artistic story which reflects the every-day experiences of real life; artistic in that it touches these daily experiences with an idealism revealing the significance and beauty of that which the jaded taste of the adult designates as "commonplace." That all children crave the story which is, or might be, true is evidenced by the expression of their faces when their inevitable question, "is it really true?" or "did it really happen?" is answered in the affirmative.

Perhaps some of us can recall the pleasure derived from old-fashioned school readers of an earlier day. With all their faults they at least did not overlook the value of standard realistic stories. In these readers was found the very moral story of the boy who won the day because of his forethought in providing an extra piece of whipcord. There was also "Meddlesome Matty," and the honest office-boy, the heroic lad of Holland, and the story of the newly liberated prisoner who bought a cage full of captive birds and set them free. These and many others still persist in memory, and point with unerring aim to standards of human behavior under conditions which are both possible and probable. In spite of their imperfections and stern morality these stories were valuable because they recited the fundamental events of human and animal existence, in relations which revealed the inevitable law of cause and effect, and the ethical and poetic significance of man's relation to all life.

As soon as children begin to realize the distinction between the world of make-believe and the world of actuality, or, as one small boy expressed it, "what I can see with my eyes shut, and what I can see when I open them," they are fascinated with stories of real life, of "when Father was a little boy," or "when Mother was a little girl," or "when you were a tiny baby." This demand of the child for realistic stories is the expression of a real want which should be satisfied with good literature....