All Aboard; or, Life on the Lake A Sequel to "The Boat Club" 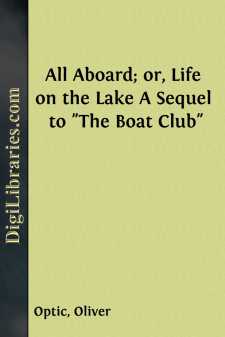 It can hardly be supposed that all the boys who take up this book have read the Boat Club; therefore it becomes necessary, before the old friends of the club are permitted to reunite with them, to introduce whatever new friends may be waiting to join them in the sports of the second season at Wood Lake. However wearisome such a presentation may be to those who are already acquainted, my young friends will all allow that it is nothing more than civility and good manners.

Frank Sedley is the only son of Captain Sedley, a retired shipmaster, of lofty and liberal views, and of the most estimable character. He is not what some people would call an "old fogy," and likes to have the boys enjoy themselves in everything that is reasonable and proper; but not to the detriment of their manners or morals, or to the neglect of their usual duties.

Having been a sailor all his life, he has none of that fear of boats and deep water which often haunts the minds of fond parents, and has purchased a beautiful club boat for the use of his son and other boys who live in the vicinity of Wood Lake.

Some fathers and mothers may think this was a very foolish act on the part of Captain Sedley, that the amusement he had chosen for his son was too dangerous in itself, and too likely to create in him a taste for aquatic pursuits that may one day lead him to be a sailor, which some tender mothers regard as "a dreadful thing," as, indeed, it is, under some circumstances.

But it must be remembered that Captain Sedley had been a sailor himself; that he had followed the seas from early youth; and that he had made his fortune and earned his reputation as a wise, good, and respectable man, on the sea. So, of course, he could not sympathize with the general opinion that a ship must necessarily be a "sink of iniquity," a school of vice, and that nothing good can be expected of a boy who is sent to sea. He believes that the man will grow out of the boy; and to his parental duty he applies the apostolic maxim, "Whatsoever a man soweth, that shall he also reap."

The club boat and the boat club, as means of instruction and discipline, as well as of amusement, were suggested by an accidental occurrence. The "Bunkers of Rippleton," a set of idle and dissolute boys, had constructed a rude raft, upon which they paddled about on the lake, and appeared to enjoy themselves very much. Captain Sedley, who had forbidden his son to venture upon the lake on the raft, or even in a boat, without permission, overheard Charles Hardy, the intimate friend of Frank, remark that the "Bunkers" had a much better time than they had, and that boys who did not obey their parents often enjoyed themselves more than those who did.

A few days after, the boys discovered the club boat, the light and graceful Zephyr, resting like a fairy shell upon the lake, and in its use the argument of Charles was effectually refuted. A club was formed of the boys in the neighborhood, and under the instruction of Uncle Ben, an old sailor who lived with Captain Sedley, soon became very expert in the management of the boat....