All Aboard A Story for Girls 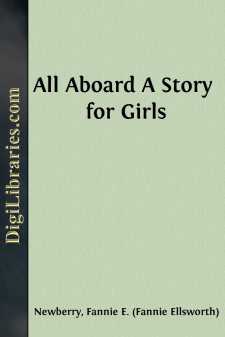 "ALL ABOARD!" CHAPTER I. DEBBY HAS A CALLER.

The second speaker was a large, corpulent woman, with a voluminous white apron tied about her voluminous waist. She stood deferentially before the prospective roomer who had asked the question, to whom she was showing the accommodations of her house, with interpolations of a private nature, on a subject too near her heart, to-day, to be ignored even with strangers. As she stood nodding her head with an emphasis that threatened to dislodge the smart cap with purple ribbons, which she had rather hastily assumed when summoned to the door, the caller mentally decided that here was a good soul, indeed, but rather loquacious to be the sole guardian of two girls "putty as twin blooms."

She, herself, was tall and slender, and wore her rich street costume with an easy elegance, as if fine clothing were too much a matter of course to excite her interest. But upon her face were lines which showed that, at some time, she had looked long and deeply into the hollow eyes of trouble, possibly despair. Even the smile now curving her well-turned lips lacked the joyousness of youth, though in years she seemed well on the sunny side of early middle age. She was evidently in no hurry this morning, and finding her possible landlady so ready to talk, bent an attentive ear that was most flattering to the good creature.

"I knew," she said, sinking into a rattan chair tied up with blue ribbons, like an over-dressed baby, "that these rooms had an air which suggested youth and beauty. I don't wonder your heart is sore to lose them."

"Ah, it's broke it is, 'm!" the voice breaking in sympathy, "for I've looked upon 'em as my own, entirely, and it's nigh to eighteen year, now. Their mother, just a slip of a girl herself, 'm, had only time for a long look at her babbies before she begun to sink, and when she see, herself, 'twas the end, she whispered, 'Debby'—I was right over her, 'm, leaving the babbies to anybody, for little they were to me then, beside the dear young mistress—so she says, says she, 'Debby!' and I says, very soft-like, 'Yes, Miss Helen,'—'cause, mind you, I'd been her maid afore she was merrit at all, and I allays forgot when I wasn't thinkin', and give her the old name—and I says, 'Yes, Miss Helen?' And then she smiles up at me just as bright as on her wellest days, 'm, and says, 'Call 'em Faith and Hope,' Debby; that's what they would be to me if—and not rightly onderstandin' of her, I breaks in, 'Faith and Hope? Call what faith and hope?' For, thinkses I, 'she may be luny with the fever.' But no, she says faint-like, but clear and sound as a bell, 'Call my babies so. Let their names be Faith and Hope, and when their poor father comes home, say it was my wish, and he must not grieve too much, for he will have Faith and Hope always with him.' And then the poor dear sinks off again and never rightly comes to, till she's clean gone."

"And their father was on a voyage, then?"

"Yes 'm, second mate of the 'International.' He's cap'n now, 'm, with an interest in the steamship, and they do say they ain't many that's so dreadfully much finer in the big P....