Alice's Adventures in Wonderland Illustrated by Arthur Rackham. With a Proem by Austin Dobson 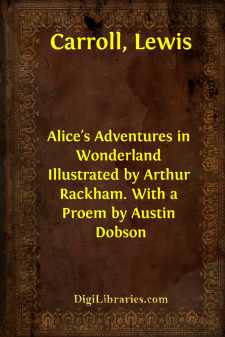 'Tis two score years since Carroll's art,With topsy-turvy magic,Sent Alice wondering through a partHalf-comic and half-tragic.Enchanting Alice! Black-and-whiteHas made your deeds perennial;And naught save "Chaos and old Night"Can part you now from Tenniel;But still you are a Type, and basedIn Truth, like Lear and Hamlet;And Types may be re-draped to tasteIn cloth-of-gold or camlet.Here comes afresh Costumier, then;That Taste may gain a wrinkleFrom him who drew with such deft penThe rags of Rip Van Winkle! AUSTIN DOBSON. All in the golden afternoonFull leisurely we glide;For both our oars, with little skill,By little arms are plied,While little hands make vain pretenceOur wanderings to guide.Ah, cruel Three! In such an hour,Beneath such dreamy weather,To beg a tale of breath too weakTo stir the tiniest feather!Yet what can one poor voice availAgainst three tongues together?Imperious Prima flashes forthHer edict "to begin it"—In gentler tone Secunda hopes"There will be nonsense in it!"—While Tertia interrupts the taleNot more than once a minute.Anon, to sudden silence won,In fancy they pursueThe dream-child moving through a landOf wonders wild and new,In friendly chat with bird or beast—And half believe it true.And ever, as the story drainedThe wells of fancy dry.And faintly strove that weary oneTo put the subject by,"The rest next time—" "It is next time!"The happy voices cry.Thus grew the tale of Wonderland:Thus slowly, one by one,Its quaint events were hammered out—And now the tale is done,And home we steer, a merry crew,Beneath the setting sun.Alice! a childish story take,And with a gentle handLay it where Childhood's dreams are twinedIn Memory's mystic band,Like pilgrim's wither'd wreath of flowersPluck'd in a far-off land. CONTENTS     PAGE I.  Down the Rabbit-hole II.  The Pool of Tears III.  A Caucus-race and a Long Tale IV.  The Rabbit sends in a Little Bill V.  Advice from a Caterpillar VI.  Pig and Pepper VII.  A Mad Tea-party VIII.  The Queen's Croquet-ground IX.  The Mock Turtle's Story X.  The Lobster Quadrille XI.  Who Stole the Tarts? XII.  Alice's Evidence LIST OF THE PLATES   To face page Alice The Pool of Tears They all crowded round it panting and asking, "But who has won?" "Why, Mary Ann, what are you doing out here?" Advice from a Caterpillar An unusually large saucepan flew close by it, and very nearly carried it off It grunted again so violently that she looked down into its face in some alarm A Mad Tea-Party The Queen turned angrily away from him and said to the Knave, "Turn them over" The Queen never left off quarrelling with the other players, and shouting "Off with his head!" or, "Off with her head!" The Mock Turtle drew a long breath and said, "That's very curious" Who stole the Tarts? At this the whole pack rose up into the air, and came flying down upon her CHAPTER I Down the Rabbit-Hole   LICE was beginning to get very tired of sitting by her sister on the bank, and of having nothing to do: once or twice she had peeped into the book her sister was reading, but it had no pictures or conversations in it, "and what is the use of a book," thought Alice, "without pictures or conversations?"

So she was considering in her own mind (as well as she could, for the hot day made her feel very sleepy and stupid) whether the pleasure of making a daisy-chain would be worth the trouble of getting up and picking the daisies, when suddenly a White Rabbit with pink eyes ran close by her....