Alice in Blunderland An Iridescent Dream 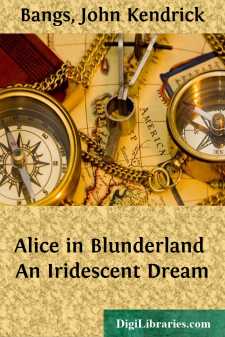 CHAPTER I OFF TO BLUNDERLAND

IT was one of those dull, drab, depressing days when somehow or other it seemed as if there wasn't anything anywhere for anybody to do. It was raining outdoors, so that Alice could not amuse herself in the garden, or call upon her friend Little Lord Fauntleroy up the street; and downstairs her mother was giving a Bridge Party for the benefit of the M. O. Hot Tamale Company, which had lately fallen upon evil days. Alice's mother was a very charitably disposed person, and while she loathed gambling in all its forms, was nevertheless willing for the sake of a good cause to forego her principles on alternate Thursdays, but she was very particular that her little daughter should be kept aloof from contaminating influences, so that Alice found herself locked in the nursery and, as I have already intimated, with nothing to do. She had read all her books—The House of Mirth, the novels of Hall Caine and Marie Corelli—the operation for appendicitis upon her dollie, while very successful indeed, had left poor Flaxilocks without a scrap of sawdust in her veins, and therefore unable to play; and worst of all, her pet kitten, under the new city law making all felines public property, had grown into a regular cat and appeared only at mealtimes, and then in so disreputable a condition that he was not thought to be fit company for a child of seven.

"Oh dear!" cried Alice impatiently, as she sat rocking in her chair, listening to the pattering of the rain upon the roof of the veranda. "I do wish there was something to do, or somebody to do, or somewhere to go. The Gov'ment ought to provide covered playgrounds for children on wet days. It wouldn't cost much, to put a glass cover on the Park!"

"A very good, idea! I'll make a note of that," said a squeaky little voice at her side.

Alice sprang to her feet in surprise. She had supposed she was alone, and for a moment she was frightened, but a glance around reassured her, for strange to say, seated on the radiator warming his toes was her old friend the Hatter, the queer old chap she had met in her marvellous trip through Wonderland, and with him was the March Hare, the Cheshire Cat, and the White Knight from Looking Glass Land.

"I don't know about these others, but I'm here," returned the Hatter. "The others seem to be here, but I respectfully decline to take my solemn daffydavy on the subject, because my doctor says I'm all the time seeing things that ain't. Besides I don't believe in swearing."

"We know that," said the White Knight. "We've been studying your case lately and we thought we'd come down and see what we could do for you. The fact is the Hatter here has founded a model city, where everything goes just right, and we came to ask you to pay us a call."

"Yep," said the March Hare. "It's called Blunderland and between you and me I don't believe anybody but the Hatter could have invented one like it. His geegantic brain conceived the whole thing, and I tell you it's a corker."

"Where is it?" asked Alice.

"That's telling," said the Hatter. "I haven't had it copyrighted yet, and until I do I ain't going to tell where it is. You can't be too careful about property these days with copperations lurkin' around everywhere to grab everything in sight."

"What? Never heard of a Copperation?" demanded the Hatter....