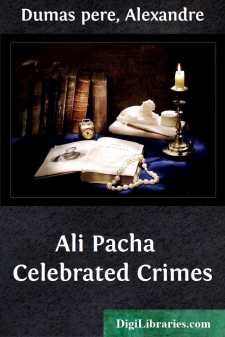 The beginning of the nineteenth century was a time of audacious enterprises and strange vicissitudes of fortune. Whilst Western Europe in turn submitted and struggled against a sub-lieutenant who made himself an emperor, who at his pleasure made kings and destroyed kingdoms, the ancient eastern part of the Continent, like mummies which preserve but the semblance of life, was gradually tumbling to pieces, and getting parcelled out amongst bold adventurers who skirmished over its ruins. Without mentioning local revolts which produced only short-lived struggles and trifling changes of administration, such as that of Djezzar Pacha, who refused to pay tribute because he thought himself impregnable in his citadel of Saint-Jean-d'Acre, or that of Passevend-Oglou Pacha, who planted himself on the walls of Widdin as defender of the Janissaries against the institution of the regular militia decreed by Sultan Selim at Stamboul, there were wider spread rebellions which attacked the constitution of the Turkish Empire and diminished its extent; amongst them that of Czerni-Georges, which raised Servia to the position of a free state; of Mahomet Ali, who made his pachalik of Egypt into a kingdom; and finally that of the man whose history we are about to narrate, Ali Tepeleni, Pacha of Janina, whose long resistance to the suzerain power preceded and brought about the regeneration of Greece.

Ali's own will counted for nothing in this important movement. He foresaw it, but without ever seeking to aid it, and was powerless to arrest it. He was not one of those men who place their lives and services at the disposal of any cause indiscriminately; and his sole aim was to acquire and increase a power of which he was both the guiding influence, and the end and object. His nature contained the seeds of every human passion, and he devoted all his long life to their development and gratification. This explains his whole temperament; his actions were merely the natural outcome of his character confronted with circumstances. Few men have understood themselves better or been on better terms with the orbit of their existence, and as the personality of an individual is all the more striking, in proportion as it reflects the manners and ideas of the time and country in which he has lived, so the figure of Ali Pacha stands out, if not one of the most brilliant, at least one of the most singular in contemporary history.

From the middle of the eighteenth century Turkey had been a prey to the political gangrene of which she is vainly trying to cure herself to-day, and which, before long, will dismember her in the sight of all Europe. Anarchy and disorder reigned from one end of the empire to the other. The Osmanli race, bred on conquest alone, proved good for nothing when conquest failed. It naturally therefore came to pass when Sobieski, who saved Christianity under the walls of Vienna, as before his time Charles Martel had saved it on the plains of Poitiers, had set bounds to the wave of Mussulman westward invasion, and definitely fixed a limit which it should not pass, that the Osmanli warlike instincts recoiled upon themselves....