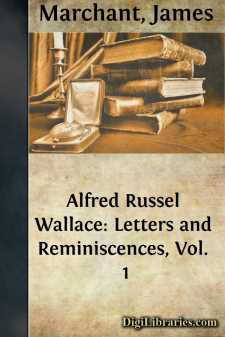 In Westminster Abbey there repose, almost side by side, by no conscious design yet with deep significance, the mortal remains of Isaac Newton and of Charles Darwin. "'The Origin of Species,'" said Wallace, "will live as long as the 'Principia' of Newton." Near by are the tombs of Sir John Herschel, Lord Kelvin and Sir Charles Lyell; and the medallions in memory of Joule, Darwin, Stokes and Adams have been rearranged so as to admit similar memorials of Lister, Hooker and Alfred Russel Wallace. Now that the plan is completed, Darwin and Wallace are together in this wonderful galaxy of the great men of science of the nineteenth century. Several illustrious names are missing from this eminent company; foremost amongst them being that of Herbert Spencer, the lofty master of that synthetic philosophy which seemed to his disciples to have the proportions and qualities of an enduring monument, and whose incomparable fertility of creative thought entitled him to share the throne with Darwin. It was Spencer, Darwin, Wallace, Hooker, Lyell and Huxley who led that historic movement which garnered the work of Lamarck and Buffon, and gave new direction to the ceaseless interrogation of nature to discover the "how" and the "why" of the august progression of life. [pg 002] Looking over the long list of the departed whose names are enshrined in our Minster, one has sorrowfully to observe that contemporary opinion of their place in history and abiding worth was not infrequently astray; that memory has, indeed, forgotten their works; and their memorials might be removed to some cloister without loss of respect for the dead, perhaps even with the silent approval of their own day and generation could it awake from its endless sleep and review the strange and eventful course of human life since they left "this bank and shoal of time." But may it not be safely prophesied that of all the names on the starry scroll of national fame that of Charles Darwin will, surely, remain unquestioned? And entwined with his enduring memory, by right of worth and work, and we know with Darwin's fullest approval, our successors will discover the name of Alfred Russel Wallace. Darwin and Wallace were pre-eminent sons of light.

Among the great men of the Victorian age Wallace occupied a unique position. He was the co-discoverer of the illuminating theory of Natural Selection; he watched its struggle for recognition against prejudice, ignorance, ridicule and misrepresentation; its gradual adoption by its traditional enemies; and its final supremacy. And he lived beyond the hour of its signal triumph and witnessed the further advance into the same field of research of other patient investigators who are disclosing fresh phases of the same fundamental laws of development, and are accumulating a vast array of new facts which tell of still richer light to come to enlighten every man born into the world. To have lived through that brilliant period and into the second decade of the twentieth century; to have outlived all contemporaries, having been the co-revealer of the greatest and most far-reaching generalisation in an era which abounded in fruitful discoveries and in revolutionary [pg 003]advances in the application of science to life, is verily to have been the chosen of the gods.

Who and what manner of man was Alfred Russel Wallace?...