by A. D. (Augustine David) Crake 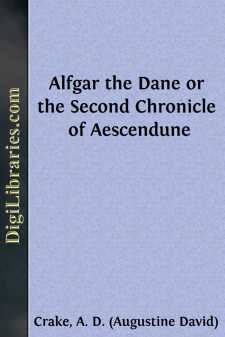 CHAPTER I. THE DIARY OF FATHER CUTHBERT.

Inasmuch as I, Cuthbert, by the long-suffering of the Divine goodness, am prior of the Benedictine house of St. Wilfrid at Aescendune, it seems in some sort my duty, following the example of many worthy brethren, to write some account of the origin and history of the priory over which it has pleased God to make me overseer, and to note, as occasion serves from time to time, such passing events as seem worthy of remembrance; which record, deposited in the archives of the house, may preserve our memory when our bodies are but dust, and other brethren fill our places in the choir. Perhaps each generation thinks the events which happen in its own day more remarkable than any which have preceded, and that its own period is the crisis of the fate of Church or State. Yet surely no records of the past, extant, tell us of such dark threatening clouds as hang over the realm of England at this time; when the thousandth year since our blessed Lord's nativity having passed, we seem to be entering on those awful plagues which the Apocalypse tells us must precede the consummation of all things.

But we who trust in the Lord have a strong tower wherein to hide, and we know of a land where there is no darkness or shadow of death; therefore we will not fear though the earth be moved, and the hills be carried into the midst of the sea.

This house of St. Wilfrid was founded by Offa, Thane of Aescendune, in the year of the Lord 938, and completed by his son and successor Ella, who was treacherously murdered by his nephew Ragnar, and lies buried within these sacred walls. The first prior was Father Cuthbert, my godfather, after whom I was named. He was appointed by Dunstan, just then on the point of leaving England to escape the rage of the wicked and unhappy Edwy, and continued to exercise the authority until the year 975, the year in which our lamented king, Edgar the Magnanimous, departed to his heavenly rest, with whose decease peace and prosperity seemed likewise to depart.

Father Godric succeeded him, under whose paternal rule we enjoyed peace for ten years. Truly the memory of the just is blessed. He died in 985, and then was I chosen by the votes of the chapter to be their prior, and my election was confirmed by the holy Dunstan, who himself admitted me to mine office.

And truly the lines have fallen unto me in pleasant places, dark although--as I have said--the times are. The priory lies on the banks of the glorious Avon, where the forests come nearly down to its banks. Above us rises a noble hill, crowned with the oak and the beech, beneath whose shade many a deer and boar repose, and their flesh, when brought thither to gladden our festivals, is indeed toothsome and savoury.

Our buildings are chiefly of wood, although the foundations are of stone. The great hall is floored and lined with oak, while the chapel--the Priory Church the people call it--excels for limning and gilding, as well as for the beauty of its tapestry, any church in this part of Mercia....