Alexander the Great Makers of History 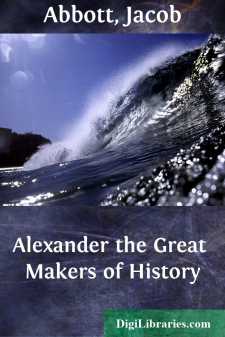 His Childhood and Youth.

The briefness of Alexander's career.

Alexander the Great died when he was quite young. He was but thirty-two years of age when he ended his career, and as he was about twenty when he commenced it, it was only for a period of twelve years that he was actually engaged in performing the work of his life. Napoleon was nearly three times as long on the great field of human action.

Notwithstanding the briefness of Alexander's career, he ran through, during that short period, a very brilliant series of exploits, which were so bold, so romantic, and which led him into such adventures in scenes of the greatest magnificence and splendor, that all the world looked on with astonishment then, and mankind have continued to read the story since, from age to age, with the greatest interest and attention.

Character of Alexander.Mental and physical qualities.

The secret of Alexander's success was his character. He possessed a certain combination of mental and personal attractions, which in every age gives to those who exhibit it a mysterious and almost unbounded ascendency over all within their influence. Alexander was characterized by these qualities in a very remarkable degree. He was finely formed in person, and very prepossessing in his manners. He was active, athletic, and full of ardor and enthusiasm in all that he did. At the same time, he was calm, collected, and considerate in emergencies requiring caution, and thoughtful and far-seeing in respect to the bearings and consequences of his acts. He formed strong attachments, was grateful for kindnesses shown to him, considerate in respect to the feelings of all who were connected with him in any way, faithful to his friends, and generous toward his foes. In a word, he had a noble character, though he devoted its energies unfortunately to conquest and war. He lived, in fact, in an age when great personal and mental powers had scarcely any other field for their exercise than this. He entered upon his career with great ardor, and the position in which he was placed gave him the opportunity to act in it with prodigious effect.

Character of the Asiatic and European civilization.

There were several circumstances combined, in the situation in which Alexander was placed, to afford him a great opportunity for the exercise of his vast powers. His native country was on the confines of Europe and Asia. Now Europe and Asia were, in those days, as now, marked and distinguished by two vast masses of social and civilized life, widely dissimilar from each other. The Asiatic side was occupied by the Persians, the Medes, and the Assyrians. The European side by the Greeks and Romans. They were separated from each other by the waters of the Hellespont, the Ægean Sea, and the Mediterranean, as will be seen by the . These waters constituted a sort of natural barrier, which kept the two races apart. The races formed, accordingly, two vast organizations, distinct and widely different from each other, and of course rivals and enemies....