Aircraft and Submarines The Story of the Invention, Development, and Present-Day Uses of War's Newest Weapons 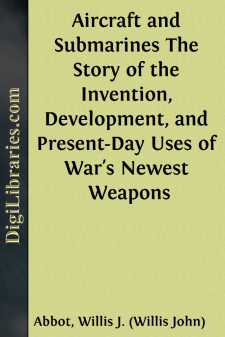 It was at Mons in the third week of the Great War. The grey-green German hordes had overwhelmed the greater part of Belgium and were sweeping down into France whose people and military establishment were all unprepared for attack from that quarter. For days the little British army of perhaps 100,000 men, that forlorn hope which the Germans scornfully called "contemptible," but which man for man probably numbered more veteran fighters than any similar unit on either side, had been stoutly holding back the enemy's right wing and fighting for the delay that alone could save Paris. At Mons they had halted, hoping that here was the spot to administer to von Kluck, beating upon their front, the final check. The hope was futile. Looking back upon the day with knowledge of what General French's army faced—a knowledge largely denied to him—it seems that the British escape from annihilation was miraculous. And indeed it was due to a modern miracle—the conquest of the air by man in the development of the airplane.

General French was outnumbered and in danger of being flanked on his left flank. His right he thought safe, for it was in contact with the French line which extended eastward along the bank of the Somme to where the dark fortress of Namur frowned on the steeps formed by the junction of that river with the Meuse. At that point the French line bent to the south following the course of the latter river.

Namur was expected to hold out for weeks. Its defence lasted but three days! As a matter of fact it did not delay the oncoming Germans a day, for they invested it and drove past in their fierce assault upon Joffre's lines. Enormously outnumbered, the French were broken and forced to retreat. They left General French's right flank in the air, exposed to envelopment by von Kluck who was already reaching around the left flank. The German troops were ample in number to surround the British, cut them off from all support, and crush or capture them all. This indeed they were preparing to do while General French, owing to some mischance never yet explained, was holding his ground utterly without knowledge that his allies had already retired leaving his flank without protection.

Photo by Peter A. Juley.

Dropping a Depth Bomb.From the Painting by Lieutenant Farré.

When that fatal information arrived belatedly at the British headquarters it seemed like a death warrant. The right of the line had already been exposed for more than half-a-day. It was inexplicable that it had not already been attacked. It was unbelievable that the attack would not fall the next moment. But how would it be delivered and where, and what force would the enemy bring to it? Was von Kluck lulling the British into a false sense of security by leaving the exposed flank unmenaced while he gained their rear and cut off their retreat? Questions such as these demanded immediate answer. Ten years before the most dashing scouts would have clattered off to the front and would have required a day, perhaps more, to complete the necessary reconnaissance....