Air Service Boys in the Big Battle Or, Silencing the Big Guns 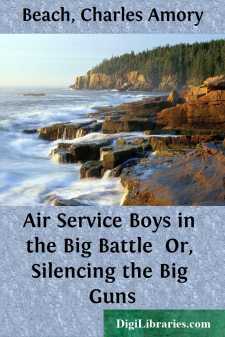 CHAPTER I. BAD NEWS FROM THE AIR

"How's my head? What do you mean? There's nothing the matter with my head," and the speaker, who wore the uniform of a French aviator, glanced up in surprise from the cot on which he was reclining in his tent near the airdromes that stretched around a great level field, not far from Paris.

Tom Raymond, whose, chum had addressed him by the military title, looked curiously at his companion, and smiled at the appellation of the term cabbage. It was one of the many little tricks picked up by association with their French flying comrades, of speaking to a friend by some odd, endearing term. It might be cucumber or rose, cabbage or cart wheel—the words mattered not, it was the meaning back of them.

"Say, is anything the matter?" went on Tom, as his chum, attired like himself', but wearing an old blouse covered with oil and grease, continued to smile. "What gave you the notion that my head hurt?"

"I didn't say it hurt. I only asked how it was. The swelling hasn't begun to subside in mine yet, and I was wondering if it had in yours."

"Swelling? Subside? What in the world—"

Jack Parmly brought to a sudden termination the rapid torrent of words from the mouth of his churn by silently pointing to a small medal fastened to the uniform jacket of his friend. It was the coveted croix de guerre.

"Nothing else, my pickled beet!" answered Jack. "Doesn't it make your head swell up as if it would burst every time you look at it? Now don't say it doesn't, for that's the way it affects me, and I'm sure you're not very different. And every time I read the citation that goes with the medal—well, I'm just aching for a chance to show it to the folks back home, aren't you, Sergeant?"

Tom Raymond started a bit at the second use of the title.

"I see you aren't any more used to it than I am!" exclaimed Jack. "Well, it'll be a little time before we stop looking around to see if it isn't some one behind us they're talking to. So I thought I'd practice it a bit on you. And you can do the same for me. I should think, out of common politeness, you'd get up, salute and call me the same."

"Oh! Now I see what you're driving at," voiced Tom, as he glanced up from a momentary look at his medal to the face of his comrade-in-arms, or perhaps in flying would be more appropriate. "The wind's in that quarter, is it?"

"Against orders, Jack. I'd like to, but we were ordered here for rest and observation work; and you know, as well as I do, that obeying orders is just as important as sending a member of the Hun Flying Circus down where he can't do any more of his grandstand stunts. But I'm hoping the time will come when we can climb up back of our machine guns again, and do our bit to show that the little old U....