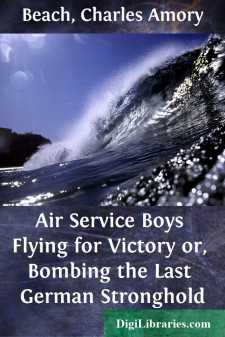 CHAPTER I IN ACTION OVER THE ARGONNE

"Will that starting signal ever come, Tom?"

"Just hold your horses, Jack. The other squadron has gone out, and is already hard at it over the Boche line. Our turn next. Keep cool. And here's hoping we both pull through with our usual good luck."

"Wow! See that big Hun plane, a Fokker, too, take the nose dive, will you? But he's overshot his mark. I warrant you he is trying like mad to get on a level keel again."

"Good-night! I could almost imagine I heard the crash away off here, even with all that thunder from Big Berthas and the crackle of hundreds of machine guns."

"It makes the goose-flesh tingle all over me, Tom, to think that some day—or it may be night—one or the other of us may finish up in just that kind of fireworks."

"The life of an air pilot is full of hazards, Jack, just remember. If he's going to make a success of his calling he's got to have nerves of steel."

"Yes, and let him lose his grip and confidence because of any unusual danger, his usefulness is gone."

"There's our signal at last, Jack!"

"Here goes! And pity the poor Boche I drive off with my new American plane, and its bully Liberty motor!"

Both young men, attired as air pilots, with goggles and gloves as well as heavy coats for extra warmth in the dizzy spaces a mile or two overhead, hastened to climb aboard their waiting machines, which were of the latest type of battleplane.

Each had an assistant, or observer, who would also handle one of the two machine-guns with which those American flying machines were armed.

The time was that period in the fall of 1918, when the fresh American host burst headlong into the battle line in Northern France.

At Château Thierry and St Mihiel they had struck the astounded foe with the force of an avalanche. The Germans, war-weary, were stunned by the vigor of the fresh army that once in action would not be denied.

Back, and still further back, the struggling lines of grey-coated Hun fighters had been thrust. Every day brought a new surprise for the Kaiser's generals. They were aghast at the resistless method of forcing the fighting adopted by these men from overseas, who seemed to have brought new and amazing elements into the work.

Already many of the more astute German leaders had begun to see the handwriting on the wall traced by the finger of Destiny. Nevertheless they had now descended to uttering boasts of how easy it was going to be to make these "crazy Yankees" pay a frightful price for every mile gained.

But the Germans who figured thus confidently failed to reckon on the rapidly growing discontent at home, where the populace was close to the starvation point. Though their soldiers still fought desperately on, it was with the sullen mien of those who had lost their morale and were close to collapse.

On the day when Tom Raymond and Jack Parmly waited, the latter so impatiently, for the anticipated signal to go into the air, the two armies were joined in battle.

The Americans had been given the most difficult task of all, which was to clean up the great Argonne Forest, and then sweep the fleeing Huns back, past Sedan, famous for the defeat of the second Napoleon, over the border into Germany itself....