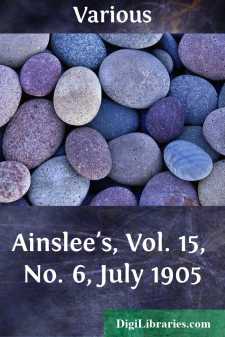 A GENTLEMAN OF THE HIGHWAYS

Since early morning nothing but sunshine had entered the hospitable doorway of The Jolly Grig, a tavern not a dozen miles from the outer edge of London town. Across the white, sanded floor golden patches of light had moved with measured tread, and merry motes had danced in the golden beams, but nothing else had stirred. On the deep hearth were piled huge logs, ready to spring into a flashing evanescent life at the whim of some chance guest, for October was drawing in his breath preparatory to blowing it out over the land.

In front of the logs, sunk deep in his chair, dozed old Marmaduke Bass, the landlord of The Jolly Grig, granting himself the joy of serving drams to dream guests, since guests in the flesh would not come to him. Round-bellied as one of his own wine casks, he slept heavily, nor was he disturbed when a slight figure was framed for a second in the doorway. A slender, girlish figure it was, and the shadow of a heavily plumed riding hat danced with the motes in the sunbeams while the young woman stood, warily, peering into the room. Empty she knew it was, for she had been full ten minutes reconnoitering to discover the fact.

How sound did old Marmaduke sleep, was the question she was asking herself. She could see that the large hands folded across his stomach rose and fell with steady rhythmic ease. Then she saw a fly—a huge, buzzing, bluebottle fly—settle for a moment on the round, bald pate of the innkeeper, and still the sleeper did not stir. Surely if a fly could not waken him, she would not.

Hurriedly, stealthily, lightly, she scurried across the floor, her lifted riding skirt displaying quite needlessly the heavy boots she wore. The skirts were held to her side by her elbows, for she had need of both her hands. In one of them she held a long silken scarf, and not until this had been dexterously twisted and tied over old Marmaduke's eyes did that worthy awake.

"Help! Murder!" he sputtered through the gauntleted fingers that covered his mouth, struggling in vain to free himself from the detaining hands.

"Quiet, quiet now, good Marmaduke," cried the young woman, in a deep, full, contralto voice. "You know well enough who I am."

"Ay, sir, now you speak, I do know you," the innkeeper answered, settling back into his chair once more; "but it's what mischief you're up to that I'd like to know."

"No mischief this time, Marmaduke. On my honor as a gentleman in his majesty's service, I swear it." Laughter was bubbling out of the girl's eyes, but her voice was deeper, gruffer, even than before. "But it happens to be my whim of the moment that you should sit there just as you are for five full minutes. I want you not to touch the scarf that's about your eyes for that long time. Promise me that, Mr. Tavern-keeper, and promise me, too, not to shout again for help. I want a room for the night. And I'll have a cup of wine with you. Ah! not so quick, good Marmaduke. At the end of the five minutes, I mean. And yet I'm thirsting, too....