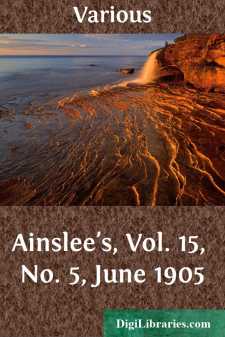 Simeon Ponsonby—the professor of botany at Harmouth—had married when over forty the eldest daughter of a distinguished though impecunious family in his own college town. His mother, on her deathbed, foresaw that he would need a housekeeper and suggested the match.

"Simeon," she said, "it isn't for us to question the Lord's ways, but I am mortally sorry to leave you, my son; it is hard for a man to shift for himself. I was thinking now if you were to marry Deena Shelton you might go right along in the old house. The Sheltons would be glad to have her off their hands, and she is used to plain living. She would know enough to keep her soup pot always simmering on the back of the range and make her preserves with half the regular quantity of sugar. I like her because she brushes her hair and parts it in the middle, and she has worn the same best dress for three years."

She didn't particularly want to marry him, but then, on the other hand, she was not violently set against it. She saw romance through her mother's eyes, and Mrs. Shelton said Professor Ponsonby was a man any girl might be proud to win. If his sympathies were as narrow as his shoulders, his scientific reputation extended over the civilized world, and Harmouth was proud of the fact. Deena's attention was not called to his sympathies, and it was called to his reputation.

He proposed to Miss Shelton in a few well-chosen words, placed his mother's old-fashioned diamond ring on her finger, and urged forward the preparations for the wedding with an impatience that bespoke an ardent disposition. Later Deena learned that his one servant had grown reckless in joints after Mrs. Ponsonby's death, and the house bills had shocked Simeon into seeking immediate aid.

At twenty Deena was able to accommodate herself to her new life with something more than resignation; a wider experience would have made it intolerable. She was flattered by his selection, proud to have a house of her own, and not sorry to be freed from the burdens of her own home. There were no little Ponsonbys, and there had been five younger Sheltons, all clamoring for Deena's love and care, whereas Simeon made no claims except that she should stay at home and care for the house and not exceed her allowance. If she expected to see a great deal of her own family she was mistaken, for, while no words passed on the subject, she felt that visiting was to be discouraged and the power to invite was vested in Simeon alone. Respect was the keynote of her attitude in regard to him, and he made little effort to bridge the chasm of years between them.

He was a tall, spare man, slightly stooped, with a prominent forehead, insignificant nose, and eyes red and strained through too ardent a use of the microscope. He habitually wore gold-rimmed spectacles; indeed, he put them on in the morning before he tied his cravat, and took them off at the corresponding moment of undressing at night. His mouth was his best feature, for, while the lips were pinched, they had a kind of cold refinement.

He was a just man but close, and the stipend he gave his wife for their monthly expenses barely kept them in comfort, but Deena had been brought up in the school of adversity, and had few personal needs....