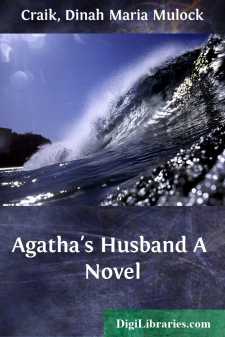 —If there ever was a woman thoroughly like her name, it was Agatha Bowen. She was good, in the first place—right good at heart, though with a slight external roughness (like the sound of the g in her name), which took away all sentimentalism. Then the vowels—the three broad rich a's—which no one can pronounce with nimini-pimini closed lips—how thoroughly they answered to her character!—a character in the which was nothing small, mean, cramped, or crooked.

But if we go on unfolding her in this way, there will not be the slightest use in writing her history, or that of one in whom her life is beautifully involved and enclosed—as every married woman's should be—

He was still in clouded mystery—an individual yet to be; and two other individuals had been "talking him over," feminine-fashion, in Miss Agatha Bowen's drawing-room, much to that lady's amusement and edification. For, being moderately rich, she had her own suite of rooms in the house where she boarded; and having no mother—sorrowful lot for a girl of nineteen!—she sometimes filled her drawing-room with very useless and unprofitable acquaintances. These two married ladies—one young, the other old—Mrs. Hill and Mrs. Thornycroft—had been for the last half-hour vexing their very hearts out to find Agatha a husband—a weakness which, it must be confessed, lurks in the heart of almost every married lady.

Agatha had been laughing at it, alternately flushing up or looking scornful, as her mouth had a natural propensity for looking; balancing herself occasionally on the arm of the sofa, which, being rather small and of a light figure, she could do with both impunity and grace; or else rushing to the open window, ostensibly to let her black kitten investigate street-sights from its mistress's shoulder. Agatha was very much of a child still, or could be when she chose.

Mrs. Hill had been regretting some two or three "excellent matches" of which she felt sure Miss Bowen had thrown away her chance; and young Mrs. Thornycroft had tried hard to persuade her dearest Agatha how very much happier she would be in a house of her own, than as a boarder even in this excellent physician's family. But Agatha only laughed on, and devoted herself more than ever to the black kitten.

She was, I fear, a damsel who rather neglected the bienséances of life. Only, in her excuse, it must be allowed that her friends were doing what they had no earthly business to do; since; if there is one subject above all upon which a young woman has a right to keep her thoughts, feelings, and intentions to herself, and to exact from others the respect of silence, it is that of marriage. Possibly, Agatha Bowen was of this opinion.

"Mrs. Hill, you are a very kind, good soul: and Emma Thornycroft, I like you very much; but if—(Oh! be quiet, Tittens!)—if you could manage to let me and 'my Husband' alone."

These were the only serious words she said—and they were but half serious; she evidently felt such an irresistible propensity to laugh....