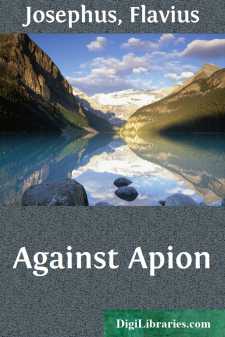 1. I Suppose that by my books of the Antiquity of the Jews, most excellent Epaphroditus, have made it evident to those who peruse them, that our Jewish nation is of very great antiquity, and had a distinct subsistence of its own originally; as also, I have therein declared how we came to inhabit this country wherein we now live. Those Antiquities contain the history of five thousand years, and are taken out of our sacred books, but are translated by me into the Greek tongue. However, since I observe a considerable number of people giving ear to the reproaches that are laid against us by those who bear ill-will to us, and will not believe what I have written concerning the antiquity of our nation, while they take it for a plain sign that our nation is of a late date, because they are not so much as vouchsafed a bare mention by the most famous historiographers among the Grecians. I therefore have thought myself under an obligation to write somewhat briefly about these subjects, in order to convict those that reproach us of spite and voluntary falsehood, and to correct the ignorance of others, and withal to instruct all those who are desirous of knowing the truth of what great antiquity we really are. As for the witnesses whom I shall produce for the proof of what I say, they shall be such as are esteemed to be of the greatest reputation for truth, and the most skillful in the knowledge of all antiquity by the Greeks themselves. I will also show, that those who have written so reproachfully and falsely about us are to be convicted by what they have written themselves to the contrary. I shall also endeavor to give an account of the reasons why it hath so happened, that there have not been a great number of Greeks who have made mention of our nation in their histories. I will, however, bring those Grecians to light who have not omitted such our history, for the sake of those that either do not know them, or pretend not to know them already.

2. And now, in the first place, I cannot but greatly wonder at those men, who suppose that we must attend to none but Grecians, when we are inquiring about the most ancient facts, and must inform ourselves of their truth from them only, while we must not believe ourselves nor other men; for I am convinced that the very reverse is the truth of the case. I mean this,—if we will not be led by vain opinions, but will make inquiry after truth from facts themselves; for they will find that almost all which concerns the Greeks happened not long ago; nay, one may say, is of yesterday only. I speak of the building of their cities, the inventions of their arts, and the description of their laws; and as for their care about the writing down of their histories, it is very near the last thing they set about. However, they acknowledge themselves so far, that they were the Egyptians, the Chaldeans, and the Phoenicians (for I will not now reckon ourselves among them) that have preserved the memorials of the most ancient and most lasting traditions of mankind; for almost all these nations inhabit such countries as are least subject to destruction from the world about them; and these also have taken especial care to have nothing omitted of what was [remarkably] done among them; but their history was esteemed sacred, and put into public tables, as written by men of the greatest wisdom they had among them....