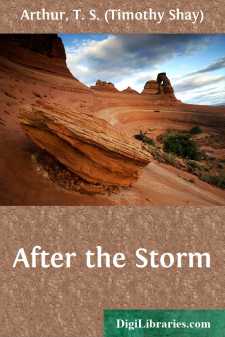 THE WAR OF THE ELEMENTS.

NO June day ever opened with a fairer promise. Not a single cloud flecked the sky, and the sun coursed onward through the azure sea until past meridian, without throwing to the earth a single shadow. Then, low in the west, appeared something obscure and hazy, blending the hill-tops with the horizon; an hour later, and three or four small fleecy islands were seen, clearly outlined in the airy ocean, and slowly ascending—avant-couriers of a coming storm. Following these were mountain peaks, snow-capped and craggy, with desolate valleys between. Then, over all this arctic panorama, fell a sudden shadow. The white tops of the cloudy hills lost their clear, gleaming outlines and their slumbrous stillness. The atmosphere was in motion, and a white scud began to drive across the heavy, dark masses of clouds that lay far back against the sky in mountain-like repose.

How grandly now began the onward march of the tempest, which had already invaded the sun's domain and shrouded his face in the smoke of approaching battle. Dark and heavy it lay along more than half the visible horizon, while its crown invaded the zenith.

As yet, all was silence and portentous gloom. Nature seemed to pause and hold her breath in dread anticipation. Then came a muffled, jarring sound, as of far distant artillery, which died away into an oppressive stillness. Suddenly from zenith to horizon the cloud was cut by a fiery stroke, an instant visible. Following this, a heavy thunder-peal shook the solid earth, and rattled in booming echoes along the hillsides and amid the cloudy caverns above.

At last the storm came down on the wind's strong pinions, swooping fiercely to the earth, like an eagle to its prey. For one wild hour it raged as if the angel of destruction were abroad.

At the window of a house standing picturesquely among the Hudson Highlands, and looking down upon the river, stood a maiden and her lover, gazing upon this wild war among the elements. Fear had pressed her closely to his side, and he had drawn an arm around her in assurance of safety.

Suddenly the maiden clasped her hands over her face, cried out and shuddered. The lightning had shivered a tree upon which her gaze was fixed, rending it as she could have rent a willow wand.

"God is in the storm," said the lover, bending to her ear. He spoke reverently and in a voice that had in it no tremor of fear.

The maiden withdrew her hands from before her shut eyes, and looking up into his face, answered in a voice which she strove to make steady:

"Thank you, Hartley, for the words. Yes, God is present in the storm, as in the sunshine."

"Look!" exclaimed the young man, suddenly, pointing to the river. A boat had just come in sight. It contained a man and a woman. The former was striving with a pair of oars to keep the boat right in the eye of the wind; but while the maiden and her lover still gazed at them, a wild gust swept down upon the water and drove their frail bark under. There was no hope in their case; the floods had swallowed them, and would not give up their living prey....