After a Shadow and Other Stories 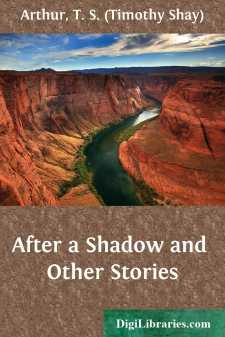 "ARTY! Arty!" called Mrs. Mayflower, from the window, one bright June morning. "Arty, darling! What is the child after? Just look at him, Mr. Mayflower!"

I leaned from the window, in pleasant excitement, to see what new and wonderful performance had been attempted by my little prodigy—my first born—my year old bud of beauty, the folded leaves in whose bosom were just beginning to loosen themselves, and send out upon the air sweet intimations of an abounding fragrance. He had escaped from his nurse, and was running off in the clear sunshine, the slant rays of which threw a long shadow before him.

"Arty, darling!" His mother's voice flew along and past his ear, kissing it in gentle remonstrance as it went by. But baby was in eager pursuit of something, and the call, if heard, was unheeded. His eyes were opening world-ward, and every new phenomenon—commonplace and unheeded by us—that addressed itself to his senses, became a wonder and a delight. Some new object was drawing him away from the loving heart and protecting arm.

"Run after him, Mr. Mayflower!" said my wife, with a touch of anxiety in her voice. "He might fall and hurt himself."

I did not require a second intimation as to my duty in the case. Only a moment or two elapsed before I was on the pavement, and making rapid approaches towards my truant boy.

"What is it, darling? What is Arty running after?" I said, as I laid my hand on his arm, and checked his eager speed. He struggled a moment, and then stood still, stooping forward for something on the ground.

"O, papa see!" There was a disappointed and puzzled look in his face as he lifted his eyes to mine. He failed to secure the object of his pursuit.

"What is it, sweet?" My eyes followed his as they turned upon the ground.

He stooped again, and caught at something; and again looked up in a perplexed, half-wondering way.

"Why, Arty!" I exclaimed, catching him up in my arms. "It's only your shadow! Foolish child!" And I ran back to Mrs. Mayflower, with my baby-boy held close against my heart.

"After a shadow!" said I, shaking my head, a little soberly, as I resigned Arty to his mother. "So life begins—and so it ends! Poor Arty!"

"After a shadow! Why, darling!" And she kissed and hugged him in overflowing tenderness.

"So life begins—so it ends," I repeated to myself, as I left the house, and walked towards my store. "Always in pursuit of shadows! We lose to-day's substantial good for shadowy phantoms that keep our eyes ever in advance, and our feet ever hurrying forward. No pause—no ease—no full enjoyment of now. O, deluded heart!—ever bartering away substance for shadow!"

I grow philosophic sometimes. Thought will, now and then, take up a passing incident, and extract the moral. But how little the wiser are we for moralizing! we look into the mirror of truth, and see ourselves—then turn away, and forget what manner of men we are. Better for us if it were not so; if we remembered the image that held our vision....