Afloat or, Adventures on Watery Trails 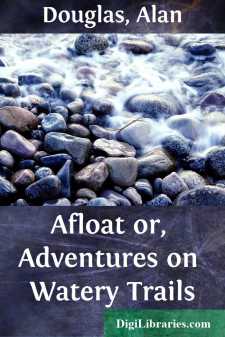 CHAPTER I THE RAIL BIRDS HEAR SOME NEWS

"Yes, and tonight the next regular meeting of the Hickory Ridge Boy Scout Troop is scheduled to take place, so we'll soon know where we stand."

"Thith hath been a pretty tame thummer for the cwowd, all told, don't you think, Lil Artha?"

"It certainly has, as sure as your name's Ted Burgoyne. Our camping out was cut short, for with so many rainy days we just had to give it up."

"Yeth, after three of the fellowth came down with bad cases of malarial fever. The mothquitoes were so plentiful."

"That was some news to me to find out that a certain breed of mosquitoes are the only ones that give you the malarial poison when they smack you."

"Huh! I used to think all that talk was a silly yarn, too, Toby, but now I put a heap of stock in the same," declared the unusually tall and thin boy, who seemed to answer to the queer name of "Lil Artha;" he had evidently been dubbed so by his comrades as an undersized cub, and when shooting up later on had been unable to shake off the absurd nickname.

"But here we've still got a couple of weeks left of our vacation, you know," remarked the chap called Toby, "and it'd be just a shame to let the good old summer time dribble away without one more whack at the woods, and the open air life we all love so well."

"Toby, jutht hold your horthes!" exclaimed the one who lisped so dreadfully, and whose name was Theodore Burgoyne, though seldom called anything but Ted; "you let Elmer decide for the crowd. I'm dead certain he'll lay out a joyouth plan at the meeting tonight that'll call for the unanimous approval of every member of the troop to be found in thith sleepy town these dog days."

"Hear! hear! Ted has got it down pat, let me tell you!" cried Toby Jones, who in the bosom of his family was occasionally reminded that he had once upon a time been christened Tobias Ellsworth Jones.

"Yes, you know our faithful and hard-working patrol leader to a dot, Ted," added the long-legged scout, with a wide grin on his thin and freckled face. "Trust Elmer Chenowith to think up a programme that will meet with universal approval. But this is a pretty warm proposition for a late August day. Let's sit in the shade a while, and cool off, while we're waiting for Landy and Chatz to show up."

Accordingly the trio of boys in faded khaki suits, that looked as though they had seen considerable service, proceeded to perch upon the top-most rail of a fence at a point where a splendid oak tree threw its wide-spreading branches over the road.

They were just outside the town of Hickory Ridge, and if you want to know where this usually wide-awake place was situated it might be well to refer to earlier books in this Series in order to ascertain all the interesting particulars.

These three lads belonged to the local troop of scouts, just then in a most flourishing condition. Under the leadership of Elmer Chenowith the Wolf Patrol of the troop had accomplished so many unusual things that a fever had taken possession of the town boys to become enrolled....