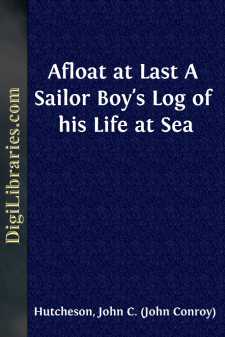 In the Rectory Garden.

“But, is there no other profession you would prefer—the law, for instance? It seems a prosperous trade enough, judging from the fact that solicitors generally appear well to do, with plenty of money—possibly that of other people—in their possession; so, considering the matter from a worldly point of view, you might do worse, Allan, than join their ranks.”

I shook my head, however, as a sign of dissent to this proposition.

“Well then, my boy,” went on father in his logical way, anxious that I should clearly understand all the bearings of the case, and have the advantages and disadvantages of each calling succinctly set before me, “there is medicine now, if you dislike the study of Themis, as your gesture would imply. It is a noble profession, that of healing the sick and soothing those bodily ills which this feeble flesh of ours is heir to, both the young and old alike—an easier task, by the way, than that of ministering to ‘the mind diseased,’ as Shakespeare has it; although, mind you, I must confess that a country physician, such as you could only hope to be, for I have not the means of buying you a London practice, has generally a hard life of it, and worse pay. However, this is beside the question; and I want to avoid biassing your decision in any way. Tell me, would you like to be a doctor—eh?”

But to this second proposal of my father as to my future career, I again signified my disapproval by shaking my head; for I did not wish to interrupt his argument by speaking until he had finished all he had to say on the subject, and I could see he had not yet quite done.

“H’m, the wise man’s dictum as to speech being silvern and silence gold evidently holdeth good with the boy, albeit such discretion in youth is somewhat rare,” he murmured softly to himself, as if unconsciously putting his thoughts in words, adding as he addressed me more directly: “You ought to get on in life, Allan; for ‘a still tongue,’ says the proverb, ‘shows a wise head.’ But now, my son, I’ve nearly come to the end of the trio of learned professions, without, I see, prepossessing you in favour of the two I have mentioned. You are averse to the law, and do not care about doctoring; well then, there’s the church, last though by no means least—what say you to following my footsteps in that sacred calling, as your brother Tom purposes doing when he leaves Oxford after taking his degree?”

I did not say anything, but father appeared to guess my thoughts.

“Too many of the family in orders already—eh? True; still, recollect there is room enough and work enough, God knows, amid all the sin and suffering there is in the world, for you also to devote your life to the same good cause in which, my son, I, your father, and your brother have already enlisted, and you may, I trust, yet prove yourself a doughtier soldier of the cross than either of us. What say you, Allan, I repeat, to being a clergyman—the noblest profession under the sun?”

“No, father dear,” I at length answered on his pausing for my reply, looking up into his kind thoughtful gray eyes, that were fixed on my face with a sort of wistful expression in them; and which always seemed to read my inmost mind, and rebuke me with their consciousness, if at any time I hesitated to tell the truth for a moment, in fear of punishment, when, as frequently happened, I chanced to be brought before him for judgment, charged with some boyish escapade or youthful folly....