Aeroplanes and Dirigibles of War 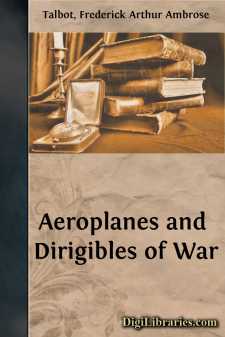 CHAPTER I. THE INTRODUCTION OF AIRCRAFT INTO MILITARY OPERATIONS

It is a curious circumstance that an invention, which is hailed as being one of the greatest achievements ever recorded in the march of civilisation, should be devoted essentially to the maiming of humanity and the destruction of property. In no other trend of human endeavour is this factor so potently demonstrated as in connection with Man's Conquest of the Air.

The dogged struggle against the blind forces of Nature was waged tenaciously and perseveringly for centuries. But the measure of success recorded from time to time was so disappointing as to convey the impression, except in a limited circle, that the problem was impossible of solution. In the meantime wondrous changes had taken place in the methods of transportation by land and sea. The steam and electric railway, steam propulsion of vessels, and mechanical movement along the highroads had been evolved and advanced to a high standard of perfection, to the untold advantage of the community. Consequently it was argued, if only a system of travel along the aerial highways could be established, then all other methods of mechanical transportation would be rendered, if not entirely obsolete, at least antiquated.

At last man triumphed over Nature—at least to such a degree as to inspire the confidence of the world at large, and to bring aerial travel and transportation within range of realisation. But what has been the result? The discovery is not devoted to the interests of peace and economic development, but to extermination and destruction.

At the same time this development may be explained. The airship and aeroplane in the present stage of evolution possess no economic value. True, cross-country cruises by airship have been inaugurated, and, up to a point, have proved popularly, if not commercially, successful, while tentative efforts have been made to utilise the aeroplane as a mail-carrier. Still, from the view-point of the community at large aerial travel is as remote as it was centuries ago.

It is somewhat interesting to observe how history is repeating itself. When the Montgolfiers succeeded in lifting themselves into the air by means of a vessel inflated with hot air, the new vehicle was hailed not so much as one possessed of commercial possibilities, but as an engine of war! When the indomitable courage and perseverance of Count von Zeppelin in the face of discouraging disasters and flagrant failures, at last commanded the attention of the German Emperor, the latter regarded the Zeppelin craft, not from the interests of peace, but as a military weapon, and the whole of the subsequent efforts of the Imperial admirer were devoted to the perfection of the airship in this one direction.

Other nations, when they embarked on an identical line of development, considered the airship from a similar point of view. In fact, outside Germany, there was very little private initiative in this field. Experiments and developments were undertaken by the military or naval, and in some instances by both branches, of the respective Powers....