Advice to a Young Man upon First Going to Oxford In Ten Letters, From an Uncle to His Nephew 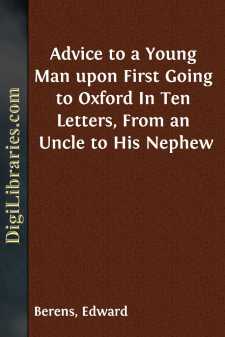 It gives me sincere pleasure to hear that you have actually become a member of the University of Oxford. This satisfaction, perhaps, may in some degree be attributed to the pleasing recollection of my own Oxford life, but certainly it arises principally from anticipation of the substantial benefits which you, I trust, will derive from your connexion with that seat of learning. At the same time, I will own that my satisfaction is not entirely   unmixed with something like apprehension. An University education has many and great advantages, but it also is attended with many temptations;—temptations to which too many young men have yielded, sometimes to the great injury of their character, and the utter ruin of all their future prospects.

In fact, you are now entering upon the most important period—the turning point—of your whole life. You have become, in a great measure, your own master. For though you will be under a certain degree of discipline and surveillance, yet in a multiplicity of cases you will have to act for yourself—to take your own line. You will have to contend against the allure   ments of pleasure and dissipation, and you have just reached the age when the natural passions and appetites become most impatient of restraint. At the same time, you will be exposed to the influence both of the example and of the solicitations of lively young men, who will try to carry you along with them in their career of thoughtlessness and folly, and who will think it strange, and show you that they think it strange, if you run not with them to the same excess of riot. Against all these moral trials and temptations, your best safeguard will be found in a strong sense of religion, kept habitually present to your mind. You must endeavour, according to the language of Scripture—(and in writing to you I   shall always gladly make use of the very words of Scripture, when they suit my purpose, as having a force and an authority which no other words can possess)—you must endeavour to set the Lord always before you. Never for a moment forget that you are continually in the presence of that awful Being, who can, and who will, call you to a strict account for all that you do amiss. Nothing can excuse your forgetting Him.

If you at all believe in a Supreme Being, the Creator and Governor of the world; if you believe that God is, and that he is a rewarder of them that diligently seek him, and at the same time an avenger to execute wrath upon every soul that doeth evil,   the least particle of common sense or common feeling will tell you, that nothing should be put in competition with his will. When his will is clear, it must be obeyed without hesitation. I am sure that you will assent to this. If religion is any thing, it is every thing. It is, indeed, the one thing needful, in comparison with which every thing else sinks into insignificance, into nothingness.

Endeavour, then, to keep up in your mind and heart this habitual sense of religion by every means in your power....