Adventures in the Far West 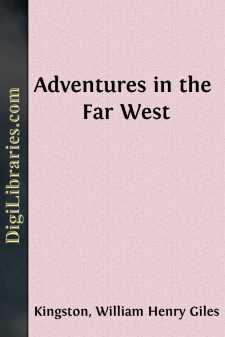 “I say, didn’t you hear a cry?” exclaimed Charley Fielding, starting up from the camp fire at which we were seated discussing our evening meal of venison, the result of our day’s hunting. He leaned forward in the attitude of listening. “I’m sure I heard it! There it is again, but whether uttered by Redskin or four-footed beast is more than I can say.”

We all listened, but our ears were not as sharp as Charley’s, for we could hear nothing.

“Sit down, Charley, my boy, and finish your supper. It was probably fancy, or maybe the hoot of an owl to its mate,” said our jovial companion, Dick Buntin, who never allowed any matter to disturb him, if he could help it, while engaged in stowing away his food.

Dick had been a lieutenant in the navy, and had knocked about the world in all climes, and seen no small amount of service. He had lately joined our party with Charley Fielding, a fatherless lad whom he had taken under his wing.

We, that is Jack Story and myself, Tom Rushforth, had come out from England together to the far west, to enjoy a few months’ buffalo hunting, deer stalking, grizzly and panther shooting, and beaver trapping, not to speak of the chances of an occasional brush with the Redskins, parties of whom were said to be on the war-path across the regions it was our intention to traverse, though none of us were inclined to be turned aside by the warnings we had received to that effect from our friends down east.

We had been pushing on further and further west, gaining experience, and becoming inured to the fatigues and dangers of a hunter’s life. Having traversed Missouri and Kansas, though we had hitherto met with no adventures worthy of note, we had that evening pitched our camp in the neighbourhood of Smoky-hill fork, the waters of which, falling into the Arkansas, were destined ultimately to reach the far-off Mississippi.

We had furnished ourselves with a stout horse apiece, and four mules to carry our stores, consisting of salt pork, beans, biscuit, coffee, and a few other necessaries, besides our spare guns, ammunition, and the meat and skins of the animals we might kill.

Having, a little before sunset, fixed on a spot for our camp, with a stream on one side, and on the other a wood, which would afford us fuel and shelter from the keen night air which blew off the distant mountains, we had unsaddled and unpacked our horses and mules, the packs being placed so as to form a circular enclosure about eight paces in diameter.

Our first care had been to water and hobble our animals, and then to turn them loose to graze, when we considered ourselves at liberty to attend to our own wants. Having collected a quantity of dry sticks, we had lighted our fire in the centre of the circle, filled our water-kettle, and put on our meat to cook. Our next care had been to arrange our sleeping places. For this purpose we cut a quantity of willows which grew on the banks of the stream hard by, and we each formed a semi-circular hut, by sticking the extremities of the osier twigs into the ground, and bending them over so as to form a succession of arches....