Adventures in the Arts Informal Chapters on Painters, Vaudeville, and Poets 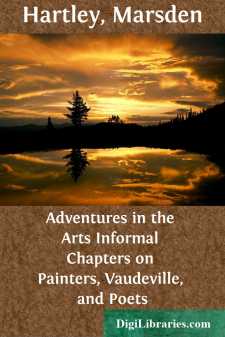 Perhaps the most important part of Criticism is the fact that it presents to the creator a problem which is never solved. Criticism is to him a perpetual Presence: or perhaps a ghost which he will not succeed in laying. If he could satisfy his mind that Criticism was a certain thing: a good thing or a bad, a proper presence or an irrelevant, he could psychologically dispose of it. But he can not. For Criticism is a configuration of responses and reactions so intricate, so kaleidoscopic, that it would be as simple to category Life itself.

The artist remains the artist precisely in so far as he rejects the simplifying and reducing process of the average man who at an early age puts Life away into some snug conception of his mind and race. This one turns the key. He has released his will and love from the vast Ceremonial of wonder, from the deep Poem of Being, into some particular detail of life wherein he hopes to achieve comfort or at least shun pain. Not so, the artist. In the moment when he elects to avoid by whatever makeshift the raw agony of life, he ceases to be fit to create. He must face experience forever freshly: reduce life each day anew to chaos and remould it into order. He must be always a willing virgin, given up to life and so enlacing it. Thus only may he retain and record that pure surprise whose earliest voicing is the first cry of the infant.

The unresolved expectancy of the creator toward Life should be his way toward Criticism also. He should hold it as part of his Adventure. He should understand in it, particularly when it is impertinent, stupid and cruel, the ponderable weight of Life itself, reacting upon his search for a fresh conquest over it. Though it persist unchanged in its rôle of purveying misinformation and absurdity to the Public, he should know it for himself a blessed dispensation.

With his maturity, the creator's work goes out into the world. And in this act, he puts the world away. For the artist's work defines: and definition means apartness: and the average man is undefined in the social body. Here is a danger for the artist within the very essence of his artistic virtue. During the years of his apprenticeship, he has struggled to create for himself an essential world out of experience. Now he begins to succeed: and he lives too fully in his own selection: he lives too simply in the effects of his effort. The gross and fumbling impact of experience is eased. The grind of ordinary intercourse is dimmed. The rawness of Family and Business is refined or removed. But now once more the world comes in to him, in the form of the Critic. Here again, in a sharp concentrated sense, the world moves on him: its complacency, its hysteria, its down-tending appetites and fond illusions, its pathetic worship of yesterdays and hatred of tomorrows, its fear-dogmas and its blood-avowals.

The artist shall leave the world only to find it, hate it only because he loves, attack it only if he serves. At that epoch of his life when the world's gross sources may grow dim, Criticism brings them back. Wherefore, the function of the Critic is a blessing and a need.

The creator's reception of this newly direct, intense, mundane intrusion is not always passive. If the artist is an intelligent man, he may respond to the intervening world on its own plane. He may turn critic himself.

When the creator turns critic, we are in the presence of a consummation: we have a complete experience: we have a sort of sacrament. For to the intrusion of the world he interposes his own body....